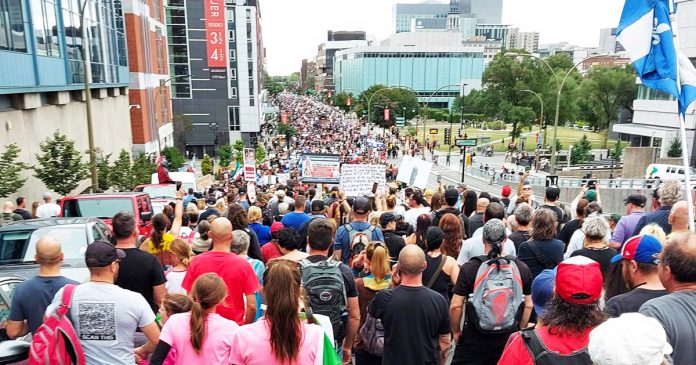 Liberal elites in politics and the media have a bigotry problem. They suffer from populist-phobia — an irrational fear and hatred of populist protesters.

Just look at the way much of the media writes off the tens of thousands of anti-lockdown protesters who have overwhelmed the streets in major Canadian cities throughout the pandemic.

Again last weekend in Montreal, Canadians of all walks of life — of diverse backgrounds and ethnicities — came out to protest against vaccine passports. An estimated 50,000 freedom-loving Canadians were peacefully using their voice to say “enough is enough.”

The media either completely ignore the concerns of these protestors, or like Liberal leader Justin Trudeau, demonized them as “angry extremists.”

Trudeau goes even further in his ruthless attacks against populist protesters.

Trudeau referred to them as “those people” — a phrase similar to the one that got iconic Canadian hockey commentator Don Cherry fired.

Trudeau mischaracterizes them as “anti-vaxxers” and flat out states that they are “racist and misogynistic.” He repeated these accusations multiple times during Thursday evening’s English leaders debate.

Trudeau saved his most passionate attack of the two debates when he unleashed a tirade at a female reporter working for Rebel News.

Trudeau is the worst offender when it comes to populist-phobia, but he is not alone.

The Leaders’ Debates Commission — a government body set up to take the election debates away from private media companies and run it themselves — went out of its way to exclude populist voices.

Rebel News founder Ezra Levant had to sue the Trudeau government for the privilege of allowing his journalists to attend the debate, and People’s Party of Canada (PPC) Leader Maxime Bernier was excluded altogether with no recourse.

This made the Debates Commission look particularly petty given that two polls released on the days of the debates showed Bernier’s party ahead of the other protest parties and even closing in on the NDP for third place nationally.

An Ekos poll released Wednesday showed the PPC polling at 10%, compared to 3% for the Greens, 4% for the Bloc and 16% for the NDP.

In case you thought that was an outlier, another Ekos poll on Thursday showed the PPC at 11% to the NDP’s 16%.

Love or hate Bernier, he is a relevant national figure with a large following who deserves to be heard.

But instead of listening to the valid concerns of a growing number of Canadians who have flocked to Bernier over his anti-establishment attitude and pro-freedom message, the political elite goes out of their way to demonize and condemn these Canadians.

Contrast this with the way the media have treated angry protesters pushing causes on the political left.

Whether it be the “climate crisis” rallies of 2019, led by the angry Greta, or Black Lives Matter protests that were hijacked by far-left calls to “defund the police,” many journalists went out of their way to defend the extremists and insist that riots and looting were actually just peaceful protests.

Once again this past summer when over 50 churches were vandalized or burned to the ground, there were those who told us it was a reckoning, that the destruction of sacred religious spaces wasn’t violence and that the church burnings were “understandable.”

Liberals have spent years lecturing Canadians on topics of “diversity and inclusion.” Trudeau routinely chastises conservatives and accuses them of marginalizing various groups of Canadians.

All of that political gesturing feels particularly trite given how readily he dehumanizes the populists.