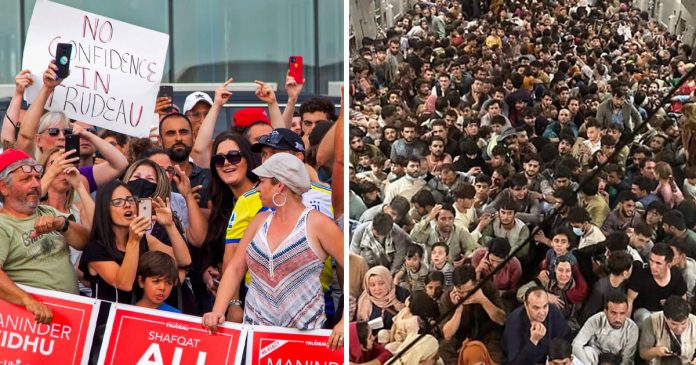 The findings were released on Monday in a memo published under the Canadian Election Misinformation Project, which is run in partnership with the University of Toronto’s Policy, Elections & Representation Lab.

In the memo, which sought to track how misinformation impacted the protestors crashing Trudeau’s campaign events, researchers noted that Canada’s media heavily featured the anti-Trudeau protests in their election reporting at the cost of other election issues.

According to their results, the media on average dedicated nearly 25% more headlines to the protestors than they did to the government’s handling of the Afghanistan evacuation or the topic of gun control.

“We pulled all headlines from Canadian news organizations from Aug. 27 to Sept. 9 (totalling 8,709 headlines) and found 3.1% contained reference to the protests (representing 268 stories during that period). Coverage of these events far exceeds that of other major stories during this period including Afghanistan (2.3%) and gun control (2.3%),” the memo noted.

The MEO notes that the media dedicated a total of 268 stories to the protests alone. To achieve their results, researchers relied on the Facebook pages of 161 Canadian media organizations.

A list exclusively obtained by True North of the Facebook pages included in the count reveals that the pages of legacy news outlets like CBC, CTV, CityNews and Global News made up 40% of the media sample. The high quantity can be explained due to the sheer volume of local and thematic legacy media Facebook pages like CBC Saskatoon, CBC Politics, Global BC, Global National and dozens of others.

Other independent outlets including the Post Millennial, the Western Standard and Rebel News were also considered by researchers.

True North made an appearance in the survey but an independent tally of Facebook posts from that period found that posts featuring the Afghanistan crisis outnumbered posts about anti-Trudeau protests by nearly two to one.

In an emailed statement to True North, MEO Research Director Aengus Bridgman also noted that the appearance of Afghanistan-related words in headlines dropped significantly following the election call on August 16, 2021.

Bridgman said, “that on August 16th nearly 12.5% of headlines contained those keywords. It remained at close to 5% for about a week then dropped to 2.3% for the period from August 27 to September 7.”