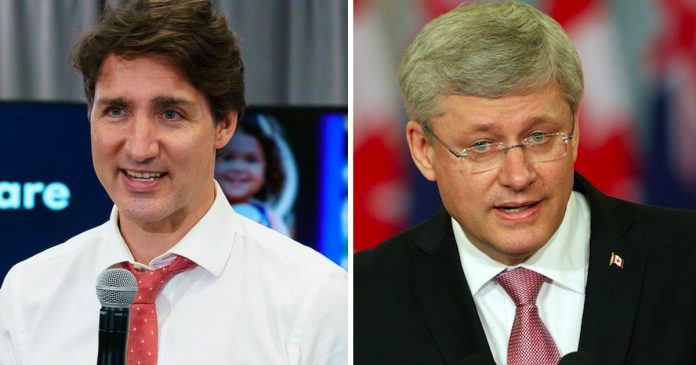 With one week until the election, Liberal leader Justin Trudeau continues to campaign against former prime minister Stephen Harper.

Despite the fact that Harper has been out of federal politics since 2015, the Liberal leader has referenced the former prime minister at least five times while on the campaign trail.

The latest instance was while Trudeau met with supporters in La Prairie, Que. on Sunday.

In response to a question about Quebec Premier François Legault’s comments that a Conservative government would be better for Quebec, Trudeau said it hasn’t hindered his campaign.

“On the contrary, what I’m hearing from Quebecers is that they are really preoccupied about the idea of going back to Stephen Harper’s targets on the environment. They really worry that weapons might be legal again and that the unanimous desire of the National Assembly of Quebec to ban handguns in Quebec won’t move forward, as it will under a Liberal government, as it won’t under a Conservative government,” Trudeau said.

Last week, Legault told journalists after the federal French language debate that a minority Conservative government under Erin O’Toole would be easier to work with.

“To protect the nation of Quebec, I think we have to be careful with these parties,” he said Thursday morning of the Liberals, NDP and Green Party.

“Those three parties, they are not ready to transfer powers to the Quebec government.”

Additionally, Legault praised O’Toole’s policy commitment to increase federal health transfers to provinces by $60 billion over the next 10 years.

This is not the first instance where Trudeau has used Harper as a bogeyman to scare Canadians into supporting his party.

In August, when he was asked about his handling of the Afghanistan evacuations, Trudeau evaded questions and instead blasted the Harper government’s supposed mishandling of the 2015 Syrian refugee crisis.