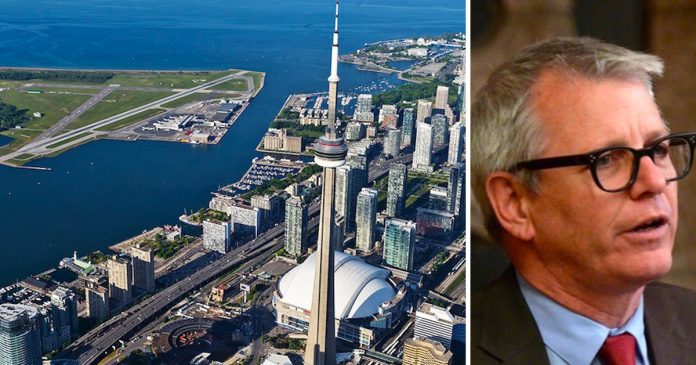 After 18 months of being grounded during the COVID pandemic, Porter Airlines once again took to the skies last week.

But it seems if outgoing Liberal MP Adam Vaughan has his way, the Toronto Island airport’s main passenger service would “fall apart.”

Perhaps disappointed the COVID-19 pandemic didn’t put the airline out of business — and with the Conservatives leading in some election polls — Vaughan has been campaigning with his would-be successor, Liberal Spadina-Fort York candidate Kevin Vuong, claiming that a Conservative government has plans to expand the airport.

In a recent email obtained by True North, an anti-Island airport supporter wrote to a list of Islanders that Adam and Kevin stopped by her home, saying: “(Erin) O’Toole would expand the airport and bring in jets…Scary stuff.”

But it appears the last time O’Toole spoke about the airport was five years ago on March 8, 2016. He rose in the House to support an opposition day motion pushing for the airport’s expansion to help prop up Bombardier’s fiscal fortunes.

“We have a situation where the government likes to talk a lot about evidence-based decision-making and yet issued its decision (not to expand the) Billy Bishop Airport with a tweet limited to 140 characters, to say that thousands of jobs and an airline’s expansion would be at risk, and the travel options for millions of people in the GTA would be limited,” O’Toole said that day.

Still vitriolic opposition to the Billy Bishop Airport is nothing new for the outgoing Spadina-Fort York MP who did everything to fight it before and after Porter Airlines took off in October of 2006. He is doing his best to scaremonger during the election campaign with a group that has never accepted the airport.

He appears to have made his opposition to the airport and the fixed link to the passenger terminal a very personal fight — in particular this past summer during a Zoom meeting with Toronto Islanders vociferously against the airport.

During a more than one hour discussion essentially on how to get rid of Porter Airlines and create a park on airport lands (the same narrative the Islanders have pushed for years), Vaughan described the situation at the airport as a “mess” and that Porter is on “life support.”

He claimed to the captive Islanders that the air travel is not going to return to justify sustaining the Island airport and that it’s “going to die by itself.”

“I believe the airport should be returned to the people of Toronto to fulfill the vision of a clean, green waterfront for all,” he said.

Vaughan added that if there’s a “moment to strike and blow the airport up,” he’d support it.

“Look I can be a spiteful bastard,” he told those on the Zoom call. “It’s as much defeating Bob Deluce (executive chairman of Porter Airlines)  and Lisa Raitt (former Conservative MP and CEO of the Port Authority) and that crowd, as putting a park there at this point.”

Brad Cicero, spokesman for Porter, responded that they’re not aware of “any plans” to expand the airport.

“We are committed to Billy Bishop and confident in our future here, with operations restarting (this week).” Cicero said last week..

“We have confidence in our business plan and we’re prepared to operate in this dynamic environment for the time being.”

He added that while parkland is important, transportation infrastructure is also crucial and Billy Bishop is probably the best urban airport in the world.

“Changing the airport’s use is something largely promoted by those with a goal of closing the airport, but it is valued by the vast majority of the city,” Cicero said.

Reached last week, Vaughan insisted the airport is “losing money” and Porter is expanding to Pearson.

He claimed the Conservative position has been “consistent” — namely that they support jets and airport expansion.

He said every Conservative candidate he’s run against has also supported jets and expansion.

“(Robert) Deluce is free to grow his business at YYZ,” he said.

But Vaughan told the Islanders during the Zoom call of earlier this summer that he has spoken to Pearson officials and they have “no interest” in Porter’s business or moving operations.