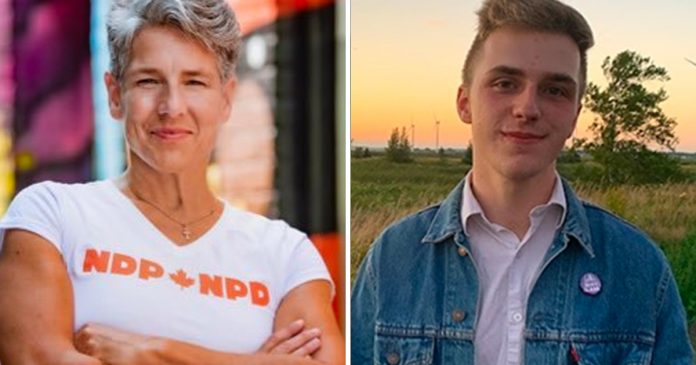 The New Democratic Party (NDP) candidate for Cumberland-Colchester Dan Osborne and the NDP candidate for Toronto-St. Paul’s Sidney Coles stepped down on Wednesday after it was discovered that they made alleged anti-Semitic comments on Twitter.

The spokesperson for the NDP George Soule confirmed Osborne and Coles have ended their campaigns, and they “agreed to educate themselves further about anti-Semitism.”

“New Democrats stand united against discrimination of all kinds,” said Soule. “We are committed to taking lasting and meaningful steps toward ending prejudice and hatred in all its forms.”

Osborne made a comment in 2019 that appeared to trivialize the Holocaust.

Auschwitz is recognized as the largest of the German Nazi concentration camps. More than 1.1 million people were killed at Auschwitz.

The Liberal candidate for York Centre Ya’ara Saks revealed Osborne’s tweet by publishing a screenshot of it on Sunday.

“@theJagmeetSingh said we need to confront antisemitism and give it no space to grow,” said Saks in a tweet. “So Mr. Singh, how will you confront it now from your NDP candidate in Cumberland-Colchester?”

Osborne has been an active member of the Young New Democrats, and he served on the executive of the Cumberland-Colchester NDP. He would have been the youngest MP in Canadian history at 18 years old if he was elected.

Coles came under fire after appearing to spread a conspiracy theory about Israel and missing COVID-19 vaccines in the USA in January.

Friends of Simon Wiesenthal Center (FSWC), a Jewish human rights organization, exposed her tweets by publishing screenshots of them on Sunday.

“We are disturbed by @SidneyCole8’s outrageous tweets in which she repeatedly accused #Israel of misappropriating US supplies of the coronavirus vaccine,” said FSWC in a tweet. “A retraction and apology for these false & offensive remarks, which have hurt members of the Jewish community, are in order.”

Coles works as the manager of Key Partnerships at Windmill Microlending, a non-profit providing microloans to immigrants and refugees. She has promoted and defended human rights and gender equity by assisting with volunteer organizations such as Doctors Without Borders.

Jewish human rights organization B’nai Brith Canada claimed in July that the NDP was not doing enough about violence against Jews. At the time, B’nai Brith Canada said it was concerned about how NDP MP Charlie Angus praised Khalida Jarrar, a senior political leader of the terrorist entity Popular Front for the Liberation of Palestine.

Past NDP candidates have been dropped for actions that were deemed anti-Semitic.

In 2019, the NDP candidate for Dartmouth-Cole Harbour Rana Zaman was removed after tweets resurfaced where she accused Israel of committing genocide, acting like Nazis and using money to influence Prime Minister Justin Trudeau.

In 2015,  the NDP candidate for Kings-Hants Morgan Wheeldon resigned after a Facebook post was found where he said Israel intended to “ethnically cleanse the region.”