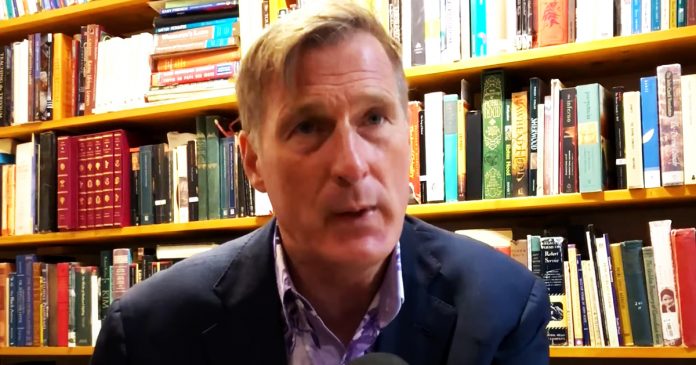 People’s Party of Canada founder and leader Maxime Bernier says his party’s members deserve to have a say as to whether he deserves to stay on as leader after next week’s election.

In an interview on True North’s The Andrew Lawton Show, Bernier said it’s a “good time” for his leadership to be reevaluated internally, though he was clear that he wishes to continue leading the party he founded two years ago after leaving the Conservative Party of Canada.

“I believe that after the election I’m ready to ask the question to our members, if they want me as their leader or not,” Bernier said. “It will be a good time to do that.”

Bernier pointed out the PPC platform is based on his platform in the 2017 Conservative leadership race, in which he received 49% of the points, narrowly losing to Andrew Scheer.

“It was easier for us to build a party with ideas,” Bernier said. “That platform was very well-received by Conservative members at that time, and now it’s well-received (by) a lot of Canadians.”

The PPC received 1.6% of the votes cast in the 2019 election, winning no seats for Bernier or any of the party’s candidates.

Opinion polls in this election have pegged PPC support at as high as 9% nationally.

While the party has held member conventions, it has never elected Bernier as leader or formally voted on his leadership.

In a financial disclosure published after the 2019 election, the PPC said it started paying Bernier an annual salary of $104,000 after he lost his Beauce seat in the House of Commons. As a member of parliament, Bernier was making $185,800 each year.

Critics have previously charged the PPC with being the “party of Max,” as independent candidate in Banff–Airdrie Derek Sloan put it in an interview with the Western Standard.

“It’s kind of the party of Max, in the sense of, they’ve had three or so years to come up with a constitution and a leadership review and all of this, and they haven’t,” Sloan said. “There’s not a lot of democratic opportunity there.”

After Sloan was kicked out of the Conservative caucus earlier this year, Bernier said he invited him to join the PPC, but he declined, opting to start his own party, which did not materialize in time for the election.

“We are the only option,” Bernier said in his interview with True North.