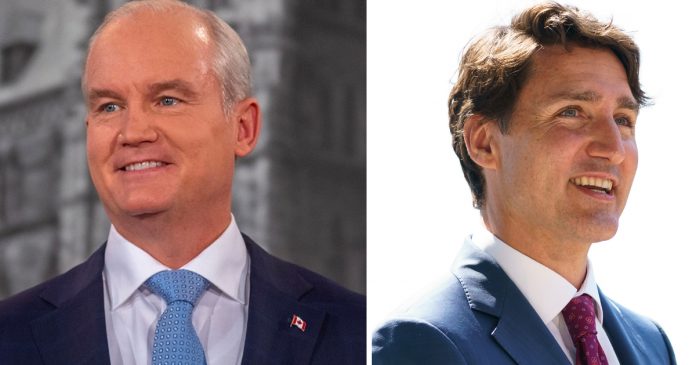 Conservative Party Leader Erin O’Toole slammed the governing Liberals after Canada was left out of an international alliance between its traditional allies the US, the UK and Australia.

The new defence pact entitled Australia-UK-US alliance (AUKUS), which was announced on Thursday, aims to counter communist China. The newly formed pact could leave Canada in the dark on vital intelligence-sharing operations and provides both countries access to nuclear submarines.

In response to the decision, O’Toole told reporters that it was indicative of Liberal Party Leader Justin Trudeau’s reputation as an unserious leader.

“This is another example that Mr. Trudeau is not taken seriously by our friends and allies around the world. Canada is becoming more irrelevant under Mr. Trudeau,” said O’Toole.

O’Toole also pledged that if elected leader, he would urge the alliance to admit Canada to the partnership.

Meanwhile, Trudeau called the pact a “deal for nuclear submarines” for Australia while downplaying the significance of Canada’s exclusion.

“This is a deal for nuclear submarines, which Canada is not currently or any time soon in the market for. Australia is,” said Trudeau.

Other nations including France and Germany were also left out. To date, France has announced that it will be removing its ambassadors from Washington DC and Australia over the exclusion.

Despite the move, Canada remains a member of the Five Eyes partnership which includes the US, the UK, Australia, New Zealand and Canada.

This is not the first time that Trudeau has failed to gain access to international organizations that his government has coveted.

In 2019, a failed bid by Trudeau to join the UN National Security Council cost Canadians over $8.6 million.