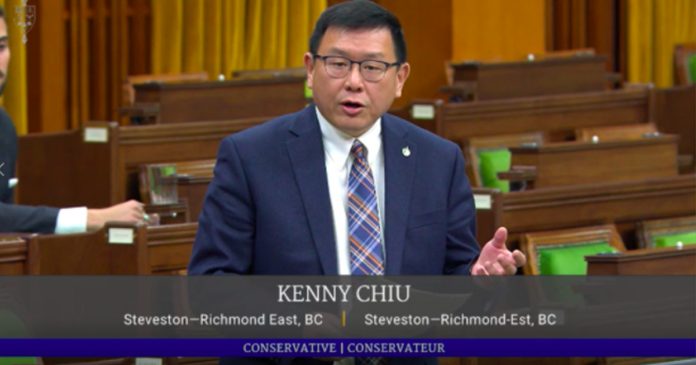 According to Chiu, his campaign faced an online assault from forces he claims could be directed by China.

Chiu believes that a private members bill he put forward earlier this year to set up a registry for foreign agents operating in Canada, made him a target of the suspected foreign influence campaign.

As a result of Chiu’s and the Conservatives’ aggressive stance on China, Chiu faced harassment online with one user going so far as calling him a “self-hating Chinese person.”

“When I go door knocking … there have been supporters of mine who just shut the door in my face,” said Chiu.

“There is so much hatred that I sense.”

According to Chiu, his views on China were misrepresented in Chinese-language media and online communities like WeChat, the popular Chinese social media app.

Campaign observer and Macdonald Laurier Institute fellow Charles Burton claimed that despite attempts to correct the false narrative around Chiu, the campaign against him spread like wildfire.

“It spread like a cancer over his campaign. He just saw his campaign disintegrating over the last couple of weeks,” said Burton.

One post on WeChat erroneously claimed that Chiu was trying to “suppress” Chinese Canadians.

Chiu was defeated by nearly 3,000 votes by Liberal candidate Parm Bains in the Steveston—Richmond East riding.

“I do think there’s risks of foreign interference, particularly with what we’ve seen happen in other democracies – allies of Canada,” he said. “We’ve seen interference from bad actors and I feel that Mr. Trudeau hasn’t been doing enough in this situation,” O’Toole said.

Prior to the election, the Canadian Security Establishment said in a July report that influence campaigns against voters posed a significant threat to the integrity of Canadian elections.

“State actors may use threats, bribery or blackmail to affect the voting behaviour of individuals inside or outside of communities,” the report said.