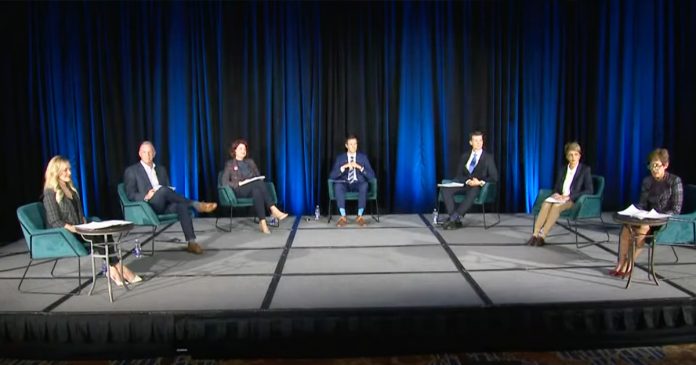 The Calgary Chamber mayoral debate was off to a rocky start after Councillor Jeromy Farkas accused opponent Councillor Jyoti Gondek of being compromised by special interest groups like unions and backroom developers.

“It’s not out of the kindness of their heart. It’s to buy a city council that will put their interests ahead of anything else.”

Farkas referred to an endorsement by Calgary’s Future – a third-party advertiser funded by several unions that represent municipal workers – which he claims have spent $1.7 million on an “American-style” campaign to buy politicians.

“We have an immense opportunity to reclaim our socioeconomic advantage. The next four years at city hall will require a steady hand, and a leader that is willing to build a team that is focused on our collective well-being,” said Gondek.

According to polls, both Farkas and Gondek are mayoral front-runners, with Gondek in the lead at 27% of decided voters and Farkas following closely behind with 24%.

Additionally, councillor Jeff Davison sits at 12% while Brad Field is polling at 5% and Jan Damery is in last place with 3% support.

“Running the city from the extreme left or the extreme right doesn’t work for Calgary anymore,” said Davison.

“If we’re going to be successful we’ve got to get out from under this cloud of negativity some of us up here have actually created in Calgary.”

Calgarians head to the polls on Monday, Oct. 18 to elect a new mayor.