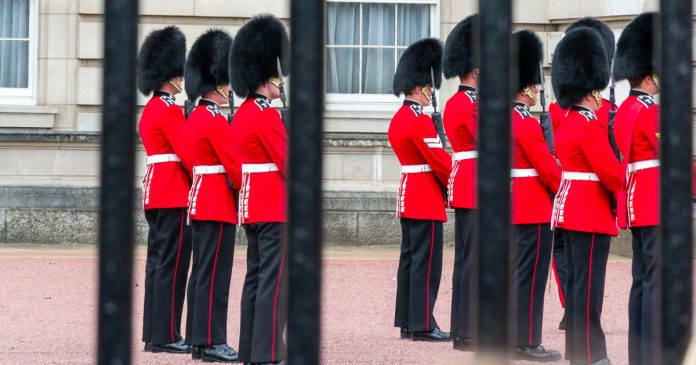 For the next month, approximately 90 Canadian soldiers will stand on guard for Queen Elizabeth II in the UK.

Until October 22, soldiers from Manitoba’s Royal Regiment of Canadian Artillery will be standing stoically outside of Buckingham Palace, the Tower of London, Windsor Castle and St. James’s Palace.

The regiment officially took over the Queen’s Guard on October 4th with the Royal Canadian Artillery band marking the occasion.

According to Buckingham Palace, it was “the first overseas regiment to take part in Changing the Guard since the start of the pandemic.”

Last week, the Queen met with the Canadian soldiers to greet the regiment and talk about their homes and families in Canada.

Being part of the Queen’s Guard will require soldiers to stand sentry outside of royal properties for two-hour shifts at a time up to three times a day.

Some soldiers will be equipped with loaded rifles and can even arrest people in emergency situations.

Although the Queen’s Guard usually is composed of one of five British regiments, Canadians have come to guard the Royal Family in the past.

In 1940, when faced with the prospect of Nazi invasion, King George VI was guarded by Canadian regiments.

This year’s invitation was not based on such dire circumstances but instead was a way to commemorate the Canadian regiment’s 150th anniversary.

Historically, the regiment was one of the earliest land units of the Canadian army following Confederation.