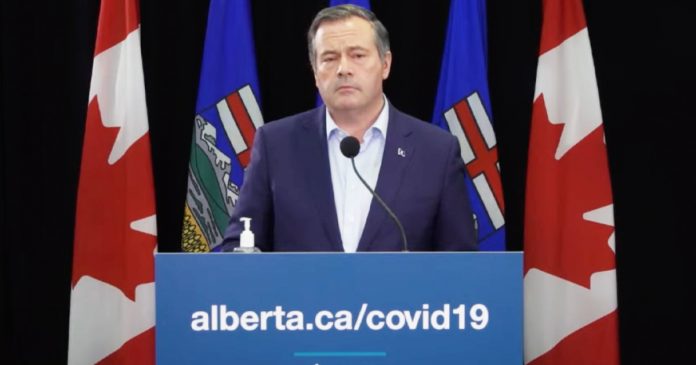 Alberta’s vaccine passports will remain in place through at least the first quarter of 2022, at which point the Alberta government will reassess the program, Premier Jason Kenney says.

Speaking to reporters Tuesday, Kenney said the government will review its “restrictions exemption program” next year based on provincial and global COVID trends, though he was clear there is no specific target for case counts or vaccination rates that will automatically trigger the end of the program.

Kenney said the risk of winter case spikes and waning vaccine immunity make it premature to identify an off-ramp for the program, which requires businesses like restaurants and entertainment venues to check for proof of vaccination or a negative test result to admit patrons.

“We have not defined a particular criteria to end the program,” Kenney said. “I fully expect that we will have it in place through at least the first quarter of next year, because we are headed into an uncertain period.”

Kenney said declining case and hospitalization numbers in the fall are no guarantee there won’t be another spike as cold weather forces people indoors in December and January.

“The jury is still out on exactly when, but we do know that both of those kinds of immunity, from prior infection and from vaccines, can wane over time,” Kenney said. “Between weather, seasonal patterns, more indoor activity and the potential for waning protection, we don’t want to let down our guard, let’s say in November if we get out of this fourth wave, only to potentially face a Christmas spike or a winter spike.”

Despite raising concerns about future decline in vaccine and infection-acquired immunity, Kenney said vaccines are proving effective, noting the majority of those in intensive care units with COVID-19 are unvaccinated.

However, Kenney wouldn’t rule out possible expansion of third-doses – commonly referred to as booster shots – as requirements for full vaccination status under Alberta’s vaccine passport program.

Earlier this month, Israel started requiring a third dose for those wishing to maintain a “green pass,” which is required for entry to restaurants and bars, among other venues.

Kenney said similar action in Alberta is “not where we’re at now,” but wouldn’t take it off the table as a future measure.

“We will closely monitor the data,” he said. “We have the advantage – we and countries around the world – of closely watching the Israeli experience to study the impact of their widespread application of booster shots to the population. We’ll cross that bridge if and when we come to it. I wouldn’t rule that out, but it’s not something that is under current consideration.”