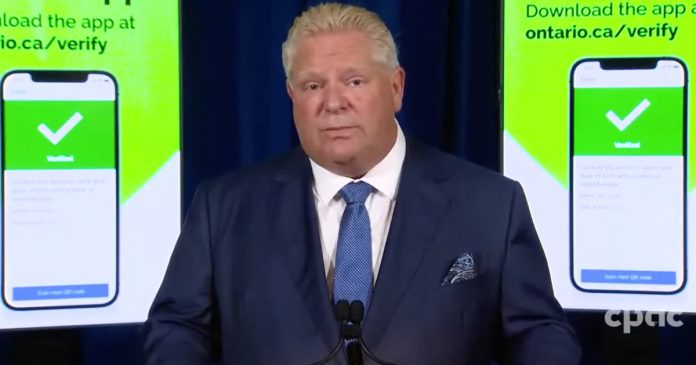 As Canadians are facing unprecedented spikes in the price of gasoline at the pump, Ontario Premier Doug Ford told reporters that the carbon tax will only compound the high prices even further.

Ford made the comments during a COVID-19 briefing on Friday, in response to a question from the media on whether he would do something to temporarily reduce the price of gasoline.

“I stood here month after month warning people about the carbon tax which was about ten cents a litre, approximately, that everything would be going up. I challenged it in court. I lost in court unfortunately. I respect the court’s decision but I kept warning people this is just the beginning with the carbon tax, it’s going to be compounded year after year,” Ford told reporters.

Ford also committed to a 10 cent reduction in provincial taxes on gas, which currently contribute 30 cents a litre to the cost at the pump.

Later in his response, Ford issued a challenge to the federal government saying that Ontario would match deductions to the federal carbon tax financially.

“I will match every single penny the federal government deducts from their tax, we will match that, so hopefully they can do it. We have to be competitive against places around the world and we need to make sure that we have competitive gas prices and the government isn’t gouging the people because it affects every single price here in Ontario and across the country,” said Ford.

Recent reports indicate that the price of gas in some parts of Ontario has reached $1.48 a litre.

Ford is not the only one pointing out how much carbon taxes are contributing to the growing cost of necessities for Canadians.

Earlier this month, the Canadian Taxpayers Federation warned that by 2030 the federal carbon tax will contribute up to 40 cents per litre on the price of gasoline on top of the already existing taxes.

“If politicians want to improve affordability and lower prices at the pumps, then they need to provide tax relief.”