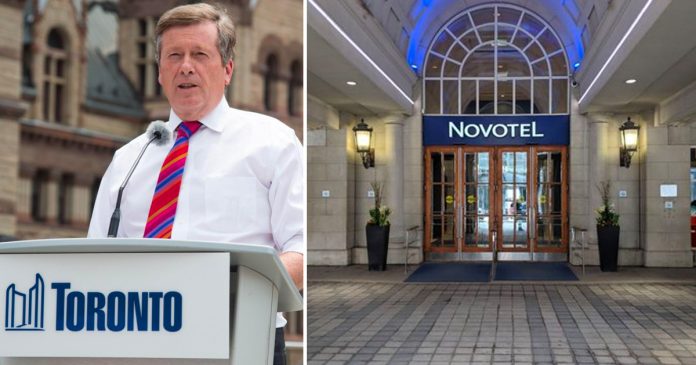 There has been a phenomenal spike in crime in the Esplanade community – a once vibrant tourist spot in downtown Toronto – since a hotel shelter opened there, a concerned citizens group heard at a recent virtual meeting.

A high-ranking 51 Division police officer familiar with activities in the area told the Downtown Concerned Citizens Organization (DCCO) that there has been a “dramatic increase in crime and disorder issues” in the surrounding neighbourhood since the four-star Novotel hotel was turned into a homeless shelter in February.

He said three long firearms were pulled out of the shelter three weeks ago and a fire set in one of the units on Sept. 28 endangered the entire shelter.

The Novotel is generating the most calls in what is already a busy division which he characterized as the “epicentre” of the city’s opioid crisis.

“The Esplanade outside the Novotel hotel is a crime hot spot,” he told residents who were on the call.

He added that there have been 69 opioid overdoses within 100 metres of the hotel so far this year compared to none last year.

The shelter offers “harm reduction” services to the 262 residents currently staying at the shelter but has no curfew, leaving many to wander the neighbourhood late at night.

The police source said there are residents from the justice system including some “very serious offenders” who have been let out on minimal bail conditions during COVID.

This is quite a different narrative from the assurances given to residents of the surrounding area when the city’s shelter employees and the operator, Homes First, held a hastily organized virtual town hall four days before the shelter opened in February.

Residents were led to believe that once the homeless were moved in, they would not be roaming the streets wreaking havoc on the community.

An information package sent to tone-deaf Toronto Mayor John Tory, councillors Kristyn Wong-Tam and Joe Cressy and the city’s shelter executives on Thursday, provides pages and pages of recorded criminal incidents and pictures of the harm done by the shelter residents.

It includes a petition signed by more than 1,200 residents and businesses impacted by the shelter, pleading that it closes on Dec. 31, the expiry date of the original lease with the Silver Hotel Group.

In the letter to City that accompanies the package, the DCCO notes that the shelter has resulted in a “rash of criminal behaviours, police, fire and EMS calls, public drug use, public defecating and urinating, robberies, physical and verbal assaults and an obvious degradation of the once safe and vibrant neighbourhood.”

A city spokesman – in response to a series of questions from True North – did not give a definitive answer as to whether the lease will be extended beyond December but did say “most hotel providers” have indicated a willingness to renew leases to at least April of 2022 “to mitigate the need for transitions during the winter.”

The city refused to disclose whether some of the residents are on bail deeming it “personal information.”

The spokesman added that every site has “clear rules” that outline expectations for behaviour by residents admitted to the site.

“The shelter is run by Homes First who brings management practices that have proven successful at its other locations,” the spokesman said. “All Homes First staff are trained in de-escalation, conflict resolution and crisis prevention.”

The existence of a security team of four guards, two community safety team officers (in the immediate perimeter of the property) and 24/7 patrols of a grid around the hotel by Community Safety Teams was also noted.

The denial by Toronto City Hall – evident in this response – would be laughable if not so pathetic.

Things have escalated so much that pay duty officers have been employed for a month to be visible and reassure the public, the police source said.

The police source says officers are “burnt out” with the huge volume of calls.

Residents acknowledged they see a difference but the source said the pay duty situation is “not sustainable.”