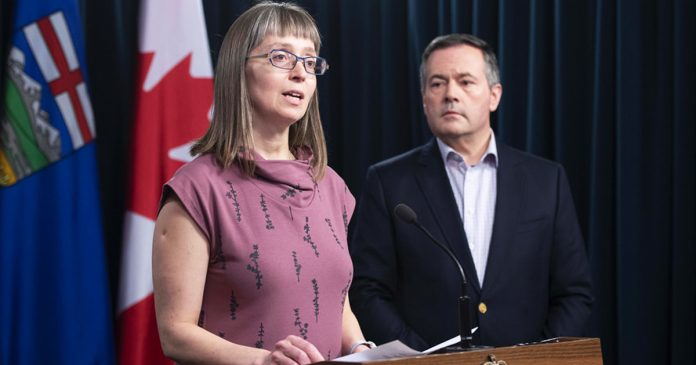 There is growing skepticism — frankly, it’s looking more like flat-out mistrust — when it comes to how the public views the way both the media and government talk about COVID-19, and one tragic story out of Alberta shows us why.

Last week Alberta’s top doctor, Dr. Deena Hinshaw, provided her routine update on the COVID situation and noted a terribly sad case of a 14-year-old boy who died with COVID. She stressed that the boy’s complex pre-existing medical conditions “played a significant role” in his death.

Much of the media were quick to sensationalize the story, with several outlets running headlines stating that Alberta had its youngest ever COVID victim while burying the important context that COVID was not the primary cause of death.

The CBC went even further , and included harsh criticism against Hinshaw for noting the context about comorbidities.

The story quoted Dr. Joe Vipond, a fierce critic of the Alberta government, who is also an NDP donor, who was apparently angry that Dr. Hinshaw would include the nuanced information about the boy’s death.

“I heard a caveat that there were comorbidities. In my mind, there are no comorbidities that matter in this instance. A 14-year-old is a 14-year-old. And, for the record, if I were to pass away tomorrow I would be listed as a 52-year-old with comorbidities,” he was quoted saying.

The issue of reporting comorbidities is a thorny one indeed. My colleague, Sun oped editor Anthony Furey, last year accurately reported that the majority of COVID deaths in Alberta occurred among patients with multiple pre-existing medical conditions like chronic heart failure and dementia.

His factual reporting was supported by both Alberta and Stats Canada data, but regardless, many cried foul. CBC even ran a headline accusing an MP of “spreading misinformation about COVID deaths in Alberta” simply because she shared Furey’s work.

Of course, context matters and we should always welcome more information.

While the likes of Vipond were angry at Dr. Hinshaw for providing too much information to the public, the 14-year-old boy’s family sent out their own messages to the public.

“The 14-year-old (in) the article is my brother. He died from stage 4 brain cancer, not COVID. This is fake news. He was diagnosed in January 2021, and hospitalized in August. Two days before his death he was tested for COVID and it turned out positive,” wrote Simone Spitzer on her personal Facebook page.

Another sister, Justine, had a similar message.

“This is my brother and he had stage 4 brain cancer for nine months, not COVID. This is fake news. This is incorrect, there is not even 1% truth. This is disgusting!”

Following these statements, Dr. Hinshaw corrected the record and apologized to the family: “The pain of losing a child is terrible enough without having that loss compounded by a public debate about the circumstances. I’m sorry if the way I spoke about that death made your grief worse.”

Dr. Hinshaw made a mistake, and two days later, she acknowledged it and apologized. Meanwhile, the likes of Vipond and the CBC continue to sensationalize and fear-monger about COVID at all costs. This also sows mistrust, and they should also consider offering an apology to the Spitzer family, and indeed all Canadians.