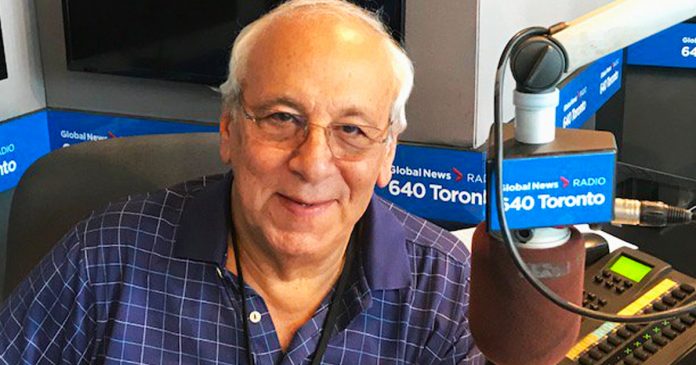 A veteran Toronto radio host has become the latest victim of a politically correct world gone mad and of a legacy media desperate to pander to the “woke”.

True North has learned that 50-year radio professional Peter Shurman, who filled in as a talk show host at 640 Toronto for five years, was told last week he was being cancelled over a bizarre incident that occurred on Sept. 24.

He was apparently given no rationale for the axing.

Shurman was filling in on the drive-time show when lesbian activist Farrah Khan came on to speak about how Smart Serve Ontario’s training program will now include training to recognize sexual violence and drug-induced sexual assault.

Prior to the interview, Shurman spoke of a naive young family member who stayed with him a few years back and who he had to caution about being careful when she endeavoured to meet strangers in bars.

He mentioned the potential to “wind up in trouble” when one orders a drink and leaves it sitting on the bar while going to the washroom.

It’s the kind of advice I wish I’d had before I naively allowed in a stranger interested in subletting my apartment while a student in Ottawa in 1978 – a stranger who beat me, tried to strangle me and left me near dead.

Khan, the manager of Ryerson University’s office of sexual violence, barely answered his first question, before proceeding to lambaste Shurman on air.

When Shurman attempted to explain what he meant, Khan hung up, insisting she hadn’t been respected.

Immediately after, Khan took to Twitter in what appeared a campaign to shame Shurman:

The Twitter lynch mob attacked almost immediately – praising Khan for standing up to a misogynist. The responses included this tweet alluding to possible violent retribution from someone who identified as Khan’s uncle:

Khan chimed in repeatedly to followers – seemingly prepared to milk the incident for all it was worth.

He claimed Shurman reacted in an “adversarial way” to Khan.

“Unfortunately our guest just wasn’t treated with the deference she should have been,” Brady said, choosing not to say that Khan would not allow Shurman to explain himself.

He said the incident moved to social media which “made the matter worse” – choosing not to mention the fact that Khan and her followers allowed things to escalate and that Shurman stayed silent.

Brady alleged that as a result, Khan was subject to “rape threats” and an “outpouring of hate” towards her and her family – not asking her to provide proof.

“We apologize as a station… we’re very sorry that this occurred,” he said.

A week later Shurman was cancelled by station management. The Ford government subsequently removed him from the Tarion Warranty Corporation board following a complaint by an NDP MPP.

Contacted for comment, Shurman said that as a lifelong radio pro and champion of sexual equality, he is “devastated.”

He refused to comment further as he’s in the process of looking into legal avenues available to him.

Efforts to get a statement from 640 Toronto were unsuccessful.

Khan, seemingly unfazed by the fallout of her Twitter campaign, indicated that while she was “disappointed” with the first interview, she was “glad” the station offered her the chance to come back to help listeners “shape understandings about sexual violence.”

She said Mr. Shurman’s employment status with AM 640 is a “matter between him and his employer.”

Khan says she never requested that he be fired, only for an “apology” and better training on sexual violence be put in place at the station.