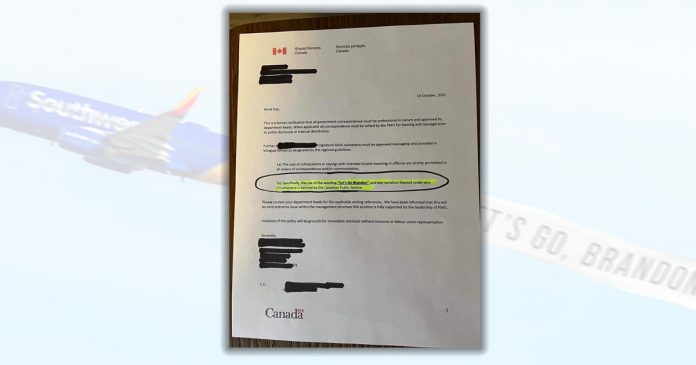 The widely shared memo that appears to be from Shared Services Canada, dictating that public servants cannot use the phrase “Let’s go Brandon” in their communications is fake, according to the National Post.

Shared Services said in a statement that they did not issue such a memo.

“We can confirm this message was not issued by Shared Services, and it does not reflect departmental policy,” the department told the National Post.

The president of the Alberta Institute Peter McCaffrey tweeted the fake memo on Sunday and garnered 4,586 retweets, 1,650 quote tweets, and 13,900 likes in a matter of hours.

“Canadian government workers must not say ‘Let’s Go Brandon,’ or any variation thereof, in any communication,” said McCaffrey followed by a smiling and crying emoji.

This fake memo appears to have originated from Halory, a Twitter account based out of Richmond, Va. Halory posted a photo of the memo, asking how it is going in Canada.

“I don’t tweet much,” said Halory. “I don’t have many followers PLEASE RT @JackPosobiec @bennyjohnson.”

The memo said communications are prohibited from containing the phrase “Let’s go Brandon” because it is offensive.

“We have been informed that this will be a zero tolerance issue within the management structure,” said the memo. “This position is fully supported by the leadership of PSAC (Public Service Alliance of Canada).”

Violations of this policy will be grounds for immediate dismissal without recourse or labour union representation, according to the forged memo.