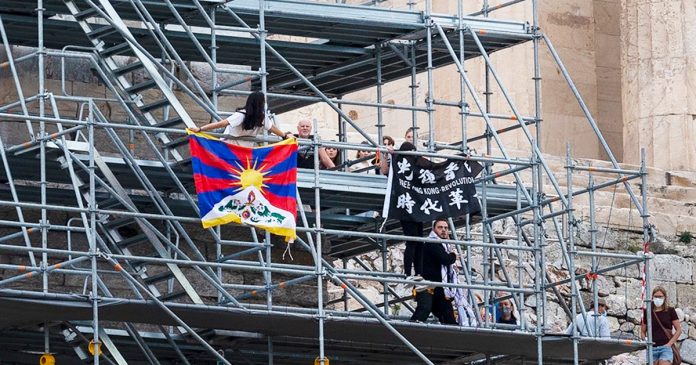 On Monday, activists unfurled a Tibetan flag and a banner that said “No genocide games” at a flame-lighting ceremony for the 2022 Olympics at Ancient Olympia in Athens.

International Tibet Network executive director Mandie McKeown said at a press conference that it is disappointing the 2022 Olympics are being held in Beijing.

“We have yet again borne witness to the hypocrisy,” said McKeown. “They’re (The International Olympics Committee) handing over the Olympic torch to a host government that is so far removed from holding any of (the Olympic) ideals that it seems we’re living in a kind of warped reality.”

There has been an outcry against the Chinese regime in recent years for the ongoing genocide against the Uyghur Muslims, the mistreatment of the Hong Kong pro-democracy protestors and the escalating tensions with Taiwan. The International Olympics Committee (IOC) has insisted the Olympics will continue regardless.

IOC president Thomas Bach said in a speech that the Olympics have to be politically neutral.

World Uyghur Congress program and advocacy manager Zumretay Arkin said at the press conference that the IOC is being unreasonable.

“If this press conference was to take place in China, I, as a Uyghur, would end up in a camp and maybe be subjected to sexual abuse and torture, as millions of my fellow Uyghurs are,” said Arkin. “The Olympic Games are being handed over to a country actively committing a genocide.”

U.S. President Joe Biden convinced fellow G7 leaders at a summit in June to include language criticizing China’s use of forced labour and other human rights violations in their joint statement.

Arkin said the G7 governments should follow up this statement by boycotting the 2022 Olympics.

“We believe that we have a better chance today ahead of the Games that governments commit to a boycott … than we had previously in 2008,” she said.

The Olympics will run from Feb. 4 to 20, with only spectators from mainland China being permitted to attend.

O’Toole’s announcement came one day after a Chinese court upheld the death penalty for Robert Schellenberg, a Canadian citizen convicted in China on drug smuggling charges.

“I know how hard our athletes are training for Beijing, but we are approaching a point where it won’t be safe for Canadians, including Olympic athletes, to travel to China,” said O’Toole.

It would appear that many Canadians agree with the Conservative leader. As revealed in a recent Nanos poll released on Oct. 11, the majority of Canadians hold a negative opinion of China and believe the federal government should be tougher on the country.

In an August Nanos poll, 45% of Canadians indicated they would support a boycott of the Beijing Games and 19% said they would somewhat support it.