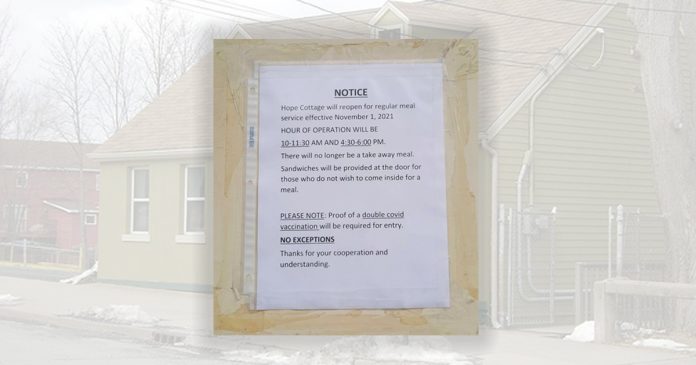 A soup kitchen in Halifax intended to help the city’s most vulnerable will require individuals to show proof of vaccination against COVID-19 before entering its premises and accessing its services.

Former department head of emergency medicine for Nova Scotia’s eastern zone Dr. Chris Milburn posted a photo of a sign at Hope Cottage on Facebook on Monday. Milburn said Hope Cottage used to be a place where people would come to sit and have a warm meal with no judgment or questions asked.

“But now if you don’t happen to be carrying your vax pass on your 800$ smartphone, tough luck,” said Milburn. “What the hell are we doing?”

Programs and services for vulnerable populations that cannot be offered virtually are exempted from Nova Scotia’s vaccine passport system, except if meals are offered. Meals can only be provided through takeout or delivery to people who cannot show proof of vaccination.

Hope Cottage confirmed in a statement emailed to True North on Wednesday that their sign exists and individuals entering its premises will be required to show proof of vaccination.

“We will be following provincial health protocols,” said Hope Cottage.

There will no longer be takeaway meals but sandwiches will be provided at the door for people who are unable to come inside for a meal.

Other provinces do not require vaccine passports for soup kitchens.

British Columbia’s vaccine passport policy does not apply to soup kitchens. Proof of vaccination is required for restaurants, cafes, pubs, bars and lounges.