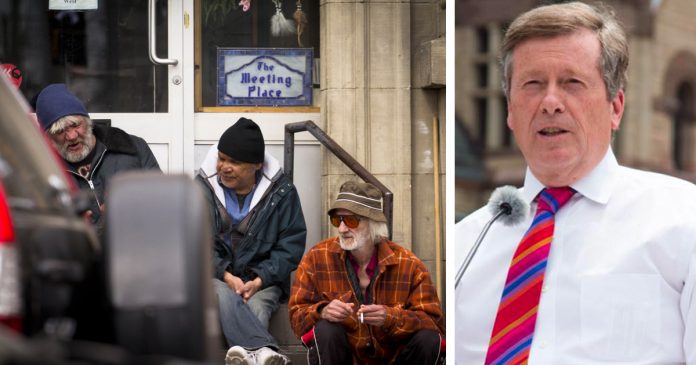 In 2018, 16% of all homeless people in Canada’s largest city identified as Indigenous. In the city of Toronto’s most recent homeless census, 15% said they had Indigenous ancestry.

In 2018, 31% of the homeless surveyed in Toronto were black. That percentage remained unchanged at 31% in this year’s street census.

White homeless people actually jumped to 41% this year from 36.6% in 2018, according to the street count.

The street census was completed on April 21 and cost $150,000, the highest amount to date of counts conducted every three years since 2006.

Despite the relatively static numbers – except for white homeless people – Toronto City Hall has dictated in its latest Homelessness Solutions Service plan to give preferential treatment to black and Indigenous homeless people, instead of helping every individual regardless of race.

In fact, the first two priorities of the service plan – approved at an Oct. 21 committee meeting – are to “meaningfully address Indigenous homelessness” and “anti-black racism.”

Does that mean that it wasn’t meaningfully addressed in the past?

“Indigenous people are overrepresented in homelessness due to the ongoing effects of colonialism, intergenerational trauma and racism,” the service plan states, noting that the city’s shelter bureaucrats are committed to “honouring and working” within the context of the Truth and Reconciliation Commission of Canada.

That includes “Indigenous cultural learning and development for staff” and increased financial investments in Indigenous housing and homeless services.

For as long as I’ve been covering the homeless cause – some 20 years – the Indigenous have been evident on the streets of Toronto. Yet never before have city staff claimed the Indigenous population are homeless due to “colonialism.”

In 2016, I wrote about councillor Joe Cressy holding court on Bloor St. W. while an Indigenous man lay sprawled out on the sidewalk behind him, completely ignored.

Even though the 2018 homeless census showed the impact of a huge influx of refugee claimants into city shelters – many from Nigeria and largely due to the illegal border crossings at Roxham Rd. – “anti-black racism” didn’t seem to be a problem then.

It is so needed, according to the city’s bureaucrats, that an internal “anti-black racism” unit has been established within the shelter division – one that will provide “training, guidance and resources” so that there is an ongoing dialogue about “anti-black racism.”

If the city spent as much time monitoring the activities of service providers in shelters and ensuring there are consequences for shelter residents who commit crimes – as they do wringing their hands on make-work projects trying to be “woke” – the city would be far safer and the homeless industry would be pushed to deliver results.

The fact that the term “solutions” is attached to the name of the plan is extremely disingenuous.

City officials – as they have for years – claim their goal is to end chronic homelessness; yet the numbers of those who continue to find themselves without a permanent roof over their heads after six months are staggering, despite the hundreds of millions of dollars poured into homeless services each year.

In this year’s census, more than half report being without a home for upwards of six months, 65% for up to five years and a scandalous 13% for 10 years or more.

Unfortunately, the Toronto shelter system seems to be proof positive of the idiom, “if you build it they will come.”

In this case, the famous line from the Field of Dreams movie is not a good thing.

Shelters were supposed to be an emergency band-aid but this year’s census shows that the number of homeless being served in emergency shelters has jumped 57% – from 3,649 15 years ago to 5,720 this year.

This street census, like the ones that have been done before, is supposed to frame future policies and targets to improve the system.

That should be the goal.