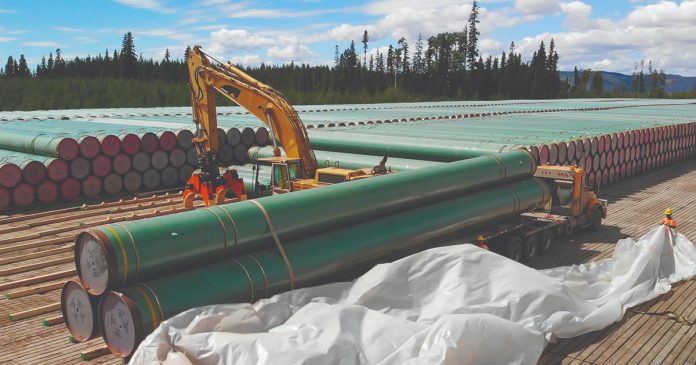 Millions of dollars in heavy equipment have been sabotaged by protesters claiming to represent Wet’suwet’en clans, despite a court order authorizing construction to continue.

On October 27, BC RCMP arrested two protesters for illegally blockading the site in Houston, BC. The two were arrested for alleged theft, mischief and possession of stolen Coastal GasLink equipment.

“The RCMP is aware of the recent events that have included mischief and damage to equipment related to industry working on the CGL pipeline. An investigation is currently underway,” RCMP North District media relations spokesperson Cpl. Madonna Saunderson told True North at the time.

BC Liberal MLA Ellis Ross spoke out in support of the besieged pipeline workers in a video posted on Facebook a few days following the incident.

“The workers are not at fault here. They are just doing the job they were supposed to do under a contract with the company. They should not be exposed to anything, other than just doing a job that was lawful,” said Ross.

“I’m not sure what’s happening up there right now because we have a government that doesn’t actually disclose what’s happening, or they have no idea … And I used to think that the NDP were playing politics with Aboriginal issues. Now, I think it’s a combination of arrogance, ignorance and incompetence.”

Upon completion, the nearly 700-kilometre pipeline will deliver natural gas from Dawson Creek BC to an LNG Canada facility in Kitimat.

According to Ross, every democratically elected chief and council along the pipeline route has signed onto agreements with the pipeline. Protesters currently occupying the area claim to represent a small band of hereditary Wet’suwet’en.

“They’re quietly dismantling our economy … They want to dismantle it under the guise of United Nations Declaration on the Rights of Indigenous Peoples,” said Ross.

“They [NDP government] actually opposed the idea of a democratically elected chief and council, who by the way signed on to LNG, every chief and council who are elected by their people signed on to the LNG agreements for Prince George to Kitimaat village including the Gitga’at and Gitxaala First Nations, the NDP disrespected that, they ignored it. In fact, they even went so far to say elected chief and councils were constructed by the Indian Act to annihilate the natives which was an absolutely horrible thing to say about elected leaders.”