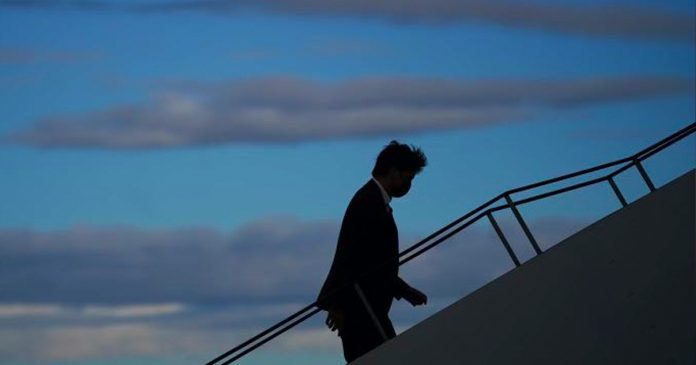 Serious question: Why should we listen to a word that anyone says at the COP26 climate change conference in Glasgow, Scotland?

An estimated 30,000 officials — including a Canadian delegation of nearly 300 politicians and their press flacks, the largest of any delegation in the G7 — travelled to the Scottish city to, what, pontificate about the various ways governments can tax and punish people into submission when it comes to lowering their carbon emissions.

Thousands of gas-guzzling, CO2-emitting airplanes were needed, we’re told, to send these morally superior beings to this crucially important climate summit to glad-hand, virtue-signal and scheme.

Our planet depends on it.

A Zoom conference call was out of the question. They needed to meet in person.

For us mere mortals back home, we’re the problem. Driving our cars, heating our homes, feeding our families with (heaven-forbid!) meat — these horrendous activities are contributing to the end of our planet.

Our political betters in Scotland recognize this. Their air travel, the scores of idling SUVs outside the conference, the gas-fueled mega-cruise ship sitting in the Glasgow harbour hosting thousands of delegates, these are necessary sacrifices that will protect our planet.

But you warming up your car in the driveway before work. That’s the real crime.

The emboldened brain trust in Scotland have begun to announce their various schemes to save us from ourselves.

First out of the gate, Trudeau called for a global carbon tax. He believes that taking more money out of the hands of entrepreneurs and families and transferring it into the hands of corrupt kleptocrats in poverty-stricken developing nations is somehow the key.

Trudeau then announced a hard cap on oil and gas emissions — a step to punish our country’s energy suppliers, the very companies whose innovation is desperately needed in efforts to reduce CO2 emissions.

Finally, Trudeau announced that the federal government will divest billions of dollars globally from projects and investments related to oil and gas. Why does Canada invest in oil and gas projects abroad while scapegoating and punishing this sector in Canada?

Former Head of the Bank of Canada Mark Carney was asked this very question during a Parliamentary Committee hearing earlier this year. In his private sector job, Carney’s company invests in pipelines around the world. In his political life, Carney supports Trudeau’s pipeline-killing policies in Canada.

Carney’s answer was less than inspiring. He basically conceded that Canada must be held to a higher standard when it comes to the transition to renewables — jobs be damned.

After the embarrassing exchange for Carney, Trudeau clearly took note. And now, a few months later, he’s announcing that the feds will no longer do what Carney does with his private investment firm.

But let us pause for a moment and look at the broader global economy.

Trudeau’s singular focus on climate change doesn’t negate that COVID is still wreaking havoc on the global economy, causing sustained unemployment, supply-chain issues that are going nowhere, and perhaps most concerning, an unprecedented spike in government spending and borrowing across the Western world and corresponding printing of money to pay for it.

Printing money leads to inflation, and the hyper printing of money could very likely lead to hyper-inflation.

Bankers and investors like Carney typically advise their clients to invest in hard assets during times of inflation — including natural resources and energy projects.

At a time where Canada’s public pension funds should be taking every precaution to protect retirement savings against the risks of inflation, Trudeau is doing the opposite.

He’s putting his green ideology ahead of what’s best for Canadians.

That, in a nutshell, is the purpose of climate summits like COP26. It allows self-righteous hypocrites like Trudeau to pretend he’s saving the planet, meanwhile, his hare-brained schemes are putting our jobs and our retirement savings at risk.