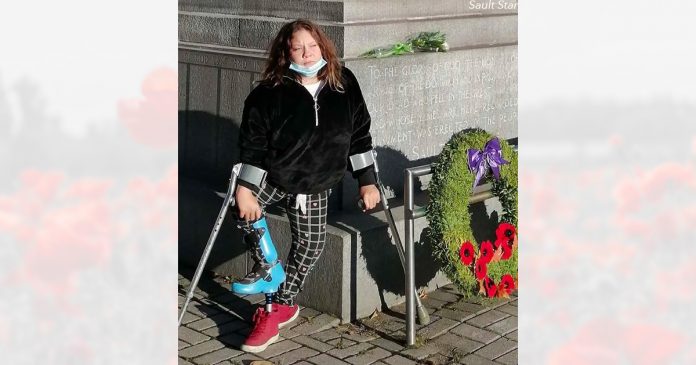 According to the outlet, Ciara stopped at a local cenotaph for five minutes of silence.

“I wanted to show my respect for the veterans. During my five minutes of silence, I was thinking about the veterans and the soldiers that have lost their lives. I wear a poppy every day now for them,” said the 13-year-old.

According to Ciara’s mother, Christina Lebouef, Ciara was born with focal femoral hypoplasia which causes her to use a prosthetic.

“Ciara was born with her right leg shorter than the other by about half. Right now she uses a prosthetic that has a second foot. We’re seeing what options we have as far as surgery goes to make things easier for her, but for right now she has her prosthetic to make it easier for her to support herself,” said Lebouef.

“We are so proud of Ciara and how far she’s come. She is so inspiring because she always stays positive. Even when she can’t figure out how to do something, she always finds a way. She’s been so amazing.”

Ciara is a member of Operation Legacy which was established in 1991 by the War Amps Child Amputee (CHAMP) program to honour war amputees.

“War amps is so great to be a part of. They’re so supportive of the kids and parents. They’re in a safe place where they can just relax and not worry about feeling different,” said Ciara’s mother.

“Ciara was happy to have the opportunity to lay a rose down at the cenotaph and show her respect.”

Ciara hopes that other kids will follow her actions and honour Canada’s veterans on Remembrance Day.