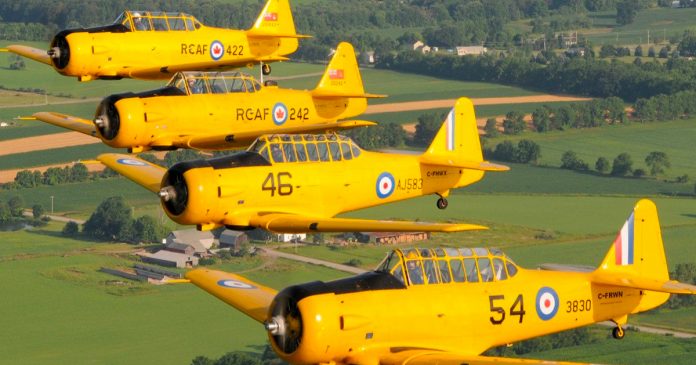 A group of volunteers in Tillsonburg, Ontario is dedicated to restoring World War II planes so that they can return to the skies.

According to the Brantford Expositor, the Canadian Harvard Aircraft Association has spent 50 days worth of repairs including 10,000 parts to restore a Harvard training plane.

“It’s iconic. For the people who stayed at home during the war, and in the ’50s, here in Canada, this is the war they saw. They saw Harvards flying,” said the association’s chief technical officer Shane Clayton.

The association, which is made up of volunteers, has been working on restoring historical Canadian aircrafts since 1985.

As for the Harvard, it was a single-engine aircraft that was employed in the training of over 130,000 pilots as part of the British Commonwealth flight training effort.

According to Clayton, the effort “was Canada’s largest single contribution to the Second World War because it was not only Canadian pilots, but British pilots, American pilots, guys from New Zealand, Australia, Indonesia, Jamaica, India … they all come here.”

The plane was in commission for training from 1939 to 1965. To date, the association houses eight of the Harvard aircraft making it the largest collection in North America.

“They were very hard aircraft to operate. But, once you mastered it, you could basically fly anything,” said Clayton.

“They are basically built like a brick outhouse. They’re made to take the damage from pilots beating (them up).”

Fewer than 100 of the aircraft can be found in Canada today and according to Clayton, 40 to 50 of them are suitable to fly.

To fly on a Harvard, it could cost $600 an hour and the association funds its efforts to repair and maintain the planes by donations from the community or plane rides offered to the public.

Anyone interested in supporting the Canadian Harvard Aircraft Association can visit the organization’s website and make a donation, buy a membership or check out their merchandise.

The association will also fly three of its planes over the cenotaph at Old City Hall in Toronto this Remembrance Day.

“The thing with us is, basically every time you fly, it’s Remembrance Day,” said Clayton.