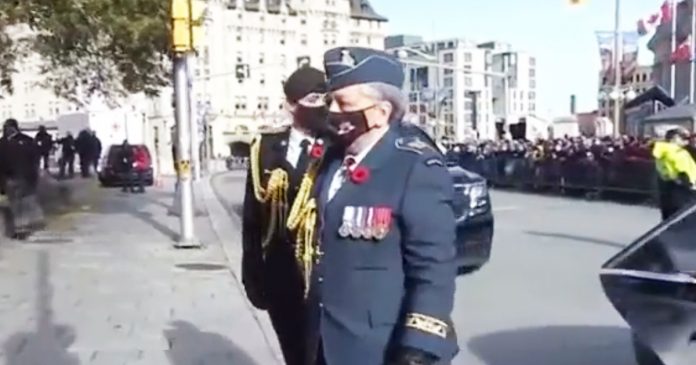 The delayed arrival of Governor General Mary Simon to the national Remembrance Day service in Ottawa interrupted a moment of silence for Canada’s fallen heroes.

Live footage of the ceremony shows Prime Minister Justin Trudeau and other officials quietly observing two minutes of silence for veterans at Ottawa’s National War Memorial. Before the two minutes conclude, the silence is abruptly interrupted by an announcement that Governor General Simon has arrived.

According to Rideau Hall Director of Communications Natalie Babin Dufresne, Simon’s delay was due to security concerns.

Simon’s office did not comment on why her arrival was not timed after the moment of silence.

Simon was not the only one to arrive late to the ceremony. Prime Minister Trudeau himself arrived minutes before 11 a.m when the moment of silence is traditionally set to take place.

According to the RCMP, a suspicious package was behind the prime minister’s and the governor general’s delay.

“As a precautionary measure, our officers investigated it and the package was cleared a few minutes after,” said the RCMP.

“It was deemed to be not dangerous. It wasn’t anything to be worried about.”

It is unclear why the delay resulted in the interruption of the two minutes of silence.

Observers on social media criticized the resulting incident as disrespectful to the memory of soldiers.

“The disrespect is staggering. Unbelievable. However, the rest of the program participants did a beautiful job of a very abbreviated ceremony,” said lawyer and former director of policy to prime minister Stephen Harper Rachel Curran.

“Good grief. Announce her after the two minutes of silence. How hard is this?” noted Toronto Sun columnist Lorrie Goldstein.