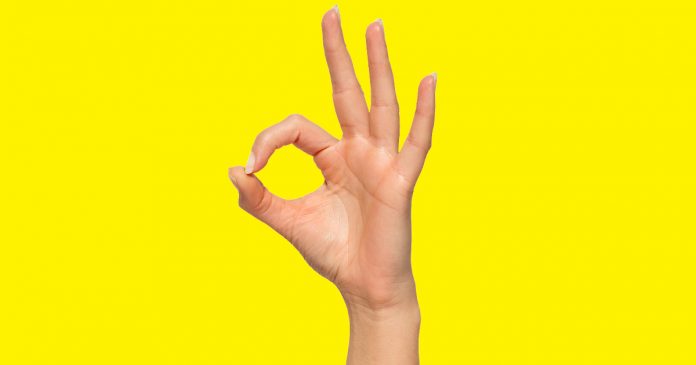 A 17-year-old high school student was fired from a hospital co-op placement after her employer alleged that an “OK” hand gesture she made in a social media photo was a symbol of white supremacy.

The hand gesture, frequently used to indicate satisfaction or approval, has been painted by the far-left as a sign meant to signal “white power.”

According to Grade 12 student Megan Breeze, she had no knowledge the sign could be misinterpreted that way.

“It wasn’t meant to be racist and it wouldn’t happen again. I thought it means ‘OK.’ Like a thumbs-up sign,” Breeze told the Hamilton Spectator.

Breeze was accepted into a co-op program at the beginning of the school year with Juravinski Hospital.

Her duties included working in customer service at the hospital and among patients in the general medicine unit.

“It was great. I was really excited. I really wanted to do that co-op,” said Breeze.

Her troubles began after the teacher who interviewed Breeze took a photo of her and four students in which she made the hand gesture which was later posted to social media.

Soon after the photo was posted, Breeze’s parents got a phone call from the Hamilton-Wentworth District School Board (HWDSB) to come into a meeting.

“They said it was a racist sign. I didn’t know. I was accused of being a racist,” said Breeze.

“I wasn’t given much information except I was being kicked out of my co-op.”

According to the Hamilton Health Services (HHS), a community member made a tip regarding Breeze accusing her of racism.

“We informed the school board when we were made aware of the posts in early October. As the pictures in the posts were taken at HHS sites, we acted decisively to emphasize that we expect all persons who come to our sites, regardless of whether they are an employee, patient, visitor or vendor to behave in a manner that ensures everyone at HHS feels respected, safe and welcome,” said HHS spokesperson Wendy Stewart.

Additionally, school board spokesperson Shawn McKillop claimed that the details of the situation were “confidential.”

“A community member noticed an unacceptable symbol in a social media post and reported it to HWDSB and program partner, Hamilton Health Sciences. The symbol, which can be interpreted as promoting hate, does not align with HWDSB’s commitment to equity and inclusion. Symbols of hate that promote racism or white supremacy ideology are not tolerated in HWDSB or anywhere in our community. The image was immediately taken down,” said McKillop.