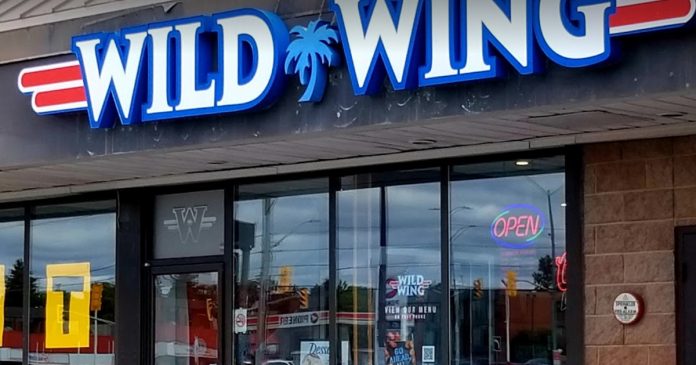 The Alcohol and Gaming Commission of Ontario (AGCO) has suspended the liquor license of Wild Wing Belleville for defying the province’s COVID-19 public health measures.

According to a press release issued on Friday by the AGCO, Wild Wing Belleville does not request vaccine confirmation from patrons, nor are masks mandated for staff and patrons inside the restaurant.

AGCO compliance officials made multiple visits to the establishment and observed a number of instances of “non-compliance.”

The Ontario government requires people entering certain settings, such as restaurants and bars, to provide proof that they are fully vaccinated against COVID-19. The province also requires staff and patrons to wear masks inside.

Wild Wing Belleville owner Jackie Banas said while she is disappointed the liquor license has been suspended, she is not too worried.

“People can buy alcohol anywhere, but they can only get our wings here,” said Banas.

“We’ve always been more of a family restaurant versus a bar, so the liquor sales won’t affect us too dramatically.”

Banas believes asking for proof of vaccination for COVID-19 is a “slippery slope” that violates her customer’s rights. She told CTV News that she’s “doing the best she can” to make everyone feel like they are welcome at the restaurant.

“We aren’t asking for vaccine passports and so if you aren’t comfortable, don’t come in,” she said.

The AGCO said they suspended Banas’ liquor license “for reasons of public interest and safety.”

“Enhanced vaccine certificates, as well as the verification app, help businesses stay open and keep their customers safe,” said AGCO CEO and registrar Tom Mungham. “We will continue to take action to ensure that the alcohol sector is operated with honesty and integrity.”

Banas said she plans on appealing this decision because Wild Wing Belleville has not been convicted on any formal charges.