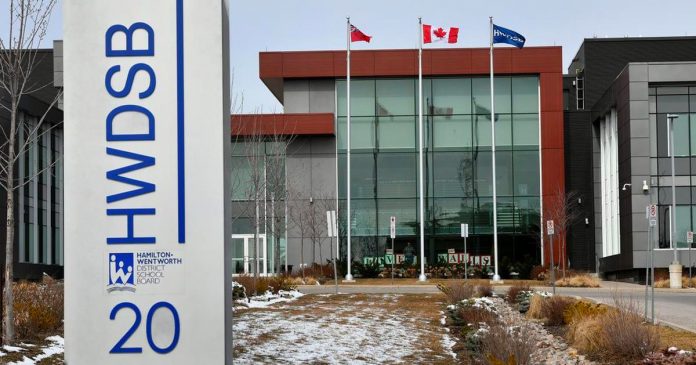 A new epidemic is spreading through public school boards in Ontario and it has nothing to do with a student’s physical health.

In the past year, school board officials have used the COVID-19 pandemic as an excuse to push their woke oppression and “anti-black” racism agenda.

The Hamilton-Wentworth District school board (HWDSB) is the latest to come to light with a series of lesson plans called Learn.Disrupt.Rebuild for kids as young as kindergarten age.

HWDSB officials unabashedly claim the program came out of COVID-19 and that it draws on the very dangerous critical race theory (CRT) to teach Hamilton students.

“(The virus) highlighted two pandemics in our society: one related to the virus itself, and one related to social inequities the virus intensified, like anti-Black racism,” officials say in the preamble to their new lesson plans.

Asked what percentage of Hamilton students are black, board spokesman Shawn McKillop said they are currently conducting a census and have no data at the moment.

However, the latest demographics show that less than 4% of Hamilton’s current population of 579,000 identify as black.

Work on the modules began last September, according to McKillop, but was just posted for public consumption on the board website a few weeks ago.

In the Learn.Disrupt.Rebuild program, primary teachers are asked to “bring race into the conversation” – a “necessary and important” way of disrupting the development of racist beliefs.

“Be aware that race is a heavy burden many racialized students carry even at a very early age due to their lived experiences,” the lesson plans say.

The final module for the primary grades is intended to teach K-Grade 3 students how to identify black racism.

Those who prepared the program say their definition of racism is grounded in CRT, an activist movement that claims racism maintains white dominance and creates an uneven playing field for black people.

The anti-racism module says CRT includes assumptions that racism is the normal way society does business and that it  “serves the interests of white people in power materially”.

The staff that put the lesson plan together warn that if a racialized (K-Gr. 3) student is unwilling to be present for these kinds of conversations, it could be because of “personal triggers.”

“Please make informed and empathetic decisions regarding ensuring a safe and inclusive setting to engage in these brave conversations,” the instructions contend as if kids that young even understand what racialized or oppression or inclusive means.

The modules for Grades 4-6 ramp things up further with lesson plans on the three Is of racism: Interpersonal, Institutional and Ideological racism.

The piece de resistance is a lesson on understanding the Black Lives Matter movement – one that has proven itself to be anti-Semitic and violent.

As a successful graduate of the Hamilton public school system at a time when academic excellence was celebrated, I feel sorry for students going through this Orwellian experiment that seeks to dumb down the curriculum and indoctrinate them using groupthink.

One wonders if Ontario Premier Doug Ford or his education minister Stephen Lecce have their eye on the ball or have they simply allowed the woke anti-oppression activists still embedded in the education ministry from the Kathleen Wynne days to run the show.

A board source who spoke to True North on condition of anonymity said she was “shocked” when the modules came to her attention in the spring.

When she dared to question the contents, repeated attempts were made to shut her down. After several attempts to get information, the school board director e-mailed her to say his staff had been directed to no longer respond to questions about the program.

“The intimation certainly is that I’m a bad person who does harm to racialized minorities,” said the source.

Asked whether Hamilton school board teachers are required to teach this divisive propaganda, McKillop said educators are legally obligated to “promote fundamental human rights” under human rights legislation – and the Learn.Disrupt.Rebuild program is the resource used by the board to meet these obligations.

“Educators may edit or revise these modules,” he said.

Still, if we are to classify human rights as the rights of all minorities – people of colour, of Muslim heritage, Jewish, queer or transexual, East Indian and South Asian – isn’t it rather racist of the officials at the Hamilton school board to single out the black experience?

I can’t imagine any of this will prepare their students for the real world.