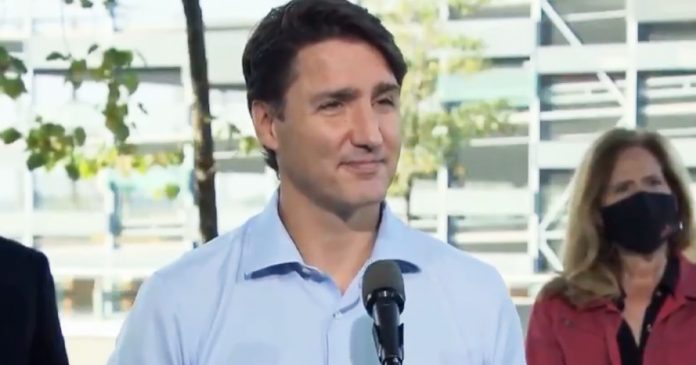 Bylaw officers at the City of Port Colborne, Ont. are forcing a homeowner to take down a vulgar banner insulting Prime Minister Justin Trudeau, according to Niagara This Week.

The banner, which reads “F*ck Trudeau” in a comic sans font, uses a maple leaf symbol to replace a single letter in the profanity. The owner of the home proudly displayed the banner on their front lawn and a small sticker on the front door also displayed the same message.

Numerous residents contacted Niagara This Week about the banner, and some have called Port Colborne’s bylaw department to make a complaint.

After an inspection from a bylaw officer, the city determined the banner violated the Property Standards Bylaw 4299/135/02. The bylaw states “exterior walls of a dwelling and their components shall be free of signs unauthorized by the Corporation of the City of Port Colborne, painted slogans, graffiti and similar defacements.”

Bylaw officers are taking action to have the banner removed.

The home is located on Main Street, and it is located near Lakeshore Catholic High School.

Niagara This Week made numerous attempts to contact the homeowner, but they were unable to connect with the individual.

Rebel News commander Ezra Levant said in a tweet it is wrong that the banner cannot be displayed.

“I would not put a sign like this on my own property,” said Levant. “But I will defend anyone’s property rights to do so, and to fight against politicians who think they have the power to go into his yard to take it down.”