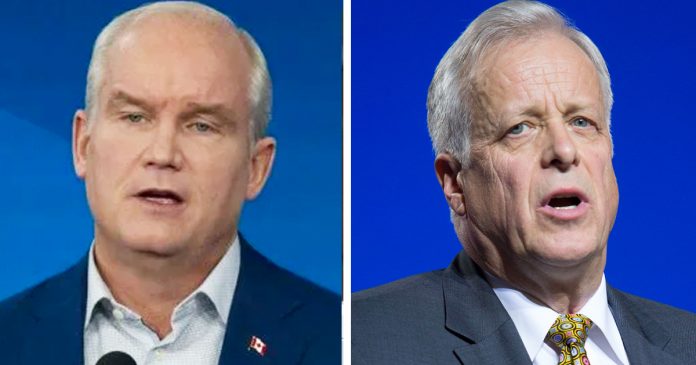 Former CPC house leader and current Leader of the Maverick Party Jay Hill decried the ejection of Saskatchewan Senator Denise Batters on Thursday and called it an affront to western Canadians.

Hill made the comments in an interview with True North, in which he called Batter’s treatment “disgusting.”

“The situation with Senator Batters plus the silence of her prairie MP colleagues on issues she identified… equalization, carbon tax and increases, emissions cap, etc. is disgusting for most Alberta and Saskatchewan citizens,” Hill told True North.

“Mr. O’Toole consistently chooses CPC positions that he hopes will appeal to Quebec and Toronto, and then demands the support of his western MPs or he threatens to throw them out!”

Senator Batters was ejected from caucus by Conservative Party Leader Erin O’Toole via voicemail earlier this week after she started a petition to hold a referendum on an early leadership review.

Batters’ petition was ruled “out of order” by CPC President Robert Batherson prior to her ejection.

Prior to his role as Maverick Party leader, Hill served as a CPC MP from 1993 to 2010 for the British Columbia riding of Prince George – Peace River.

According to Hill, he too has experienced intimidation while he was an elected MP for the Canadian Alliance in 2001. At the time, Hill was part of a breakaway group of eight MPs who called for the resignation of then-Canadian Alliance leader Stockwell Day.

“I’ve been there and experienced that attempt at intimidation from a leader…” Hill said.

“Eight of us had the courage to risk our MP jobs publicly on May 15, 2001. Where are the CPC MPs with the integrity to step forward out of the shadows to support Batters?”

“The western MPs know better but don’t have the guts to stand with their constituents instead of choosing blind loyalty to their leader!” he continued.

Hill who heads the federal Alberta independence-oriented Maverick Party, formerly known as Wexit Canada, has advocated for fairer treatment for western and prairie provinces from the federal government.