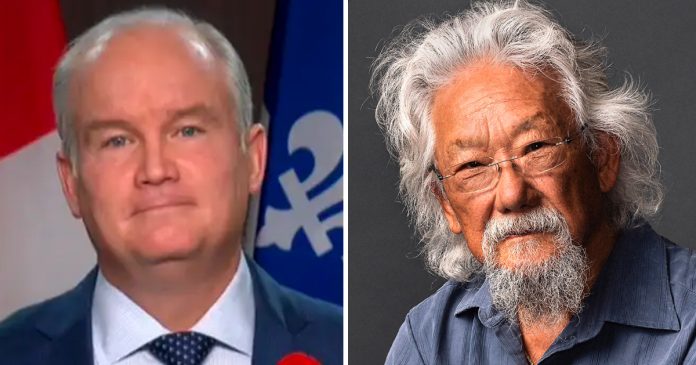 O’Toole was responding to comments Suzuki made on Saturday, in which the activist said, “there are going to be pipelines blown up if our leaders don’t pay attention to what is going on.”

Speaking to CHEK News in Victoria, British Columbia on Saturday during an Extinction Rebellion protest, Suzuki said that Canada is in “deep, deep doo doo” and that “this is what we’ve come to.”

On Monday, O’Toole took to Twitter to condemn Suzuki’s comments and call on fellow politicians to do the same.

“This type of rhetoric is dangerous and undemocratic,” O’Toole said on Twitter. “It implies that energy workers and infrastructure should be targets for acts of terrorism.”

In response to the fallout from Suzuki’s reckless comments, the foundation that bears the activists’ name, the David Suzuki Foundation issued a statement on Twitter Monday to distance themselves from Suzuki’s comments and to clarify that he did not issue a threat to destroy natural resource infrastructure.

“When David speaks publicly, he speaks on his own behalf – not for the David Suzuki Foundation,” the foundation tweeted.

“We have been in touch with David: he has confirmed that this comment was NOT a direct threat to destroy fossil fuel infrastructure.”

This isn’t the first time the woke climate activist’s comments have upset Canadians.

Suzuki once said that humans are “maggots” that “defecate all over the earth.”

He also called for an end to immigration, claiming our program is “disgusting” and that “Canada is full.”

Suzuki also once told students at McGill University that politicians who won’t meet his standards of “climate activism” should be incarcerated. He challenged students to find a “way of throwing our so-called leaders into jail.”

As of the time of this article being published, neither Prime Minister Justin Trudeau nor Jagmeet Singh has issued any condemnation of Suzuki’s comments.