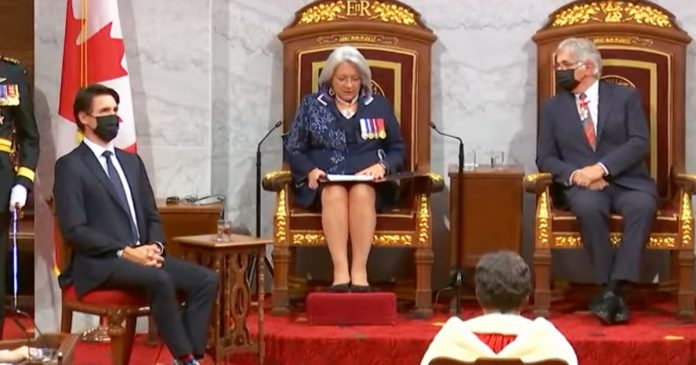 Issues pertaining to Canadians’ economic livelihood such as inflation, supply chain disruptions and the ballooning federal debt took a back seat in the Speech from the Throne on Wednesday as the 44th Parliament session convened.

Other issues like reconciliation with Indigenous peoples and tackling climate change were at the forefront of the Liberal government’s priorities.

In total, inflation and the supply chain each received one measly mention while the federal debt received no mention at all.

“Inflation is a challenge that countries around the world are facing. And while Canada’s economic performance is better than many of our partners, we must keep tackling the rising cost of living,” the speech states.

“Canada’s prosperity – and middle-class jobs – depend on preserving and expanding open, rules-based trade and ensuring our supply chains are strong and resilient.”

Conservative Party Leader Erin O’Toole addressed the throne speech and accused the Liberals of pursuing “more of the same” policies when it comes to the economy.

“To the Canadians watching at home, I have one message for you. Conservatives will be your voice. We will be the voice for millions of Canadians being left behind in Justin Trudeau’s economy,” said O’Toole.

“Today we heard more of the same from the Trudeau government. What we didn’t hear was a plan for the economy. A plan to tackle the cost of living crisis. Wages are flat and more jobs are part-time and precarious.”

According to the latest numbers provided by Statistics Canada, inflation hit a second 18-year-high this September and is currently sitting at 4.7%.

Among the goods impacted by skyrocketing prices is gasoline which was up 41.7% compared to last year. In total, transportation costs have gone up 10%, meanwhile, the cost of shelter has also surpassed the inflation rate and is currently 4.8% higher than last year.