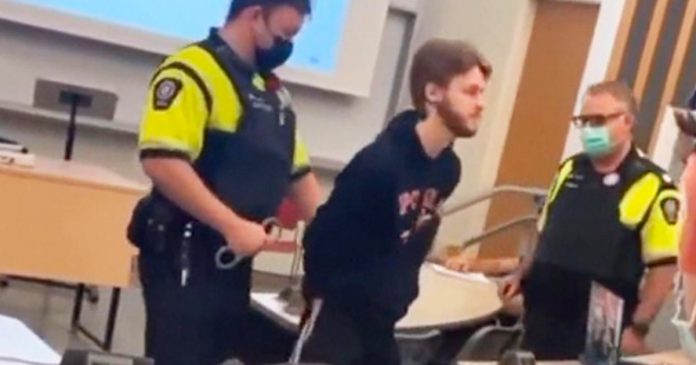 Two short videos of 22-year old engineering student Harry Wade went viral this month: in the first clip, he is seen in a classroom being handcuffed and escorted out by special constables at Western University, and in the second he is seen being dragged out by his limbs.

October 13th was the deadline for students at Western University to provide proof of vaccination or face suspension. Wade, opposed to sharing his private health information to access educational services, didn’t provide any such proof, and has since noted he has not received the Covid-19 vaccine.

For a few weeks following that October 13th deadline Wade continued to access his classes without issue, but on November 10th he was greeted by special constables outside his classroom and received a $65 fine for trespassing. The next day he was handcuffed and given a court summons, and the following week he was dragged out by his hands and feet. By November 18th he had been formally expelled from Western University, with his expulsion letter citing his non-compliance with the university’s COVID-19 Vaccination Policy.

While Wade originally felt supported by many of his fellow classmates, who would let him know which days his classroom was or wasn’t being guarded by special constables, contact with these classmates has now ceased.

In the viral videos, Wade’s peers can be seen looking on apathetically as he was hauled out of the class.

“I don’t know what the students have been told,” said Wade. “The special constable has made a point of letting me know they could be found culpable or receive their own charges for interfering with my arrest.”

“Since then I haven’t received any communication from the students that were helping me up until that point.”

Despite accusations that he is merely seeking attention, Wade reiterated that his main concerns are about mandatory vaccinations, civil liberties, and medical discrimination – not about him. “The focus is on me because they want to make an example of me to intimidate other students.”

Wade is lawyered up and fighting the court summons, but he won’t speak to whether he will be suing Western University.

He has also decided against attending university in another country with no vaccine mandates.

“My responsibilities are here, I have family here, and we are entrenched here… as grim as the outlook may be, we feel like we can do a lot of help here, at least while my story is still relevant.”

For now, he is simply seeking a job where he won’t be subject to a vaccine mandate, though he feels increasingly shut out from many lines of work.

“I don’t know how Canadians can continue to justify the vaccine as case numbers continue to rise even as we have high vaccination rates,” said Wade.

“I’m concerned that instead of having discussions about the efficacy of the vaccine, we’re going to start deflecting blame onto people that have already been excluded from society… I don’t know how they could possibly accuse us of being responsible for rising case numbers of the disease.”

Despite being barred from all Ontario campuses for five years and having trouble finding employment, Wade believes there will be a shift in the national mood as more Canadians are ordered to take booster shots.

“I think within five years, attitudes will change, and then they’ll be ready to confront the issues that we were facing at the time.”

Wade thinks that down the line, he may even see a public apology from the university.

“People are dying because of side effects from this vaccine, where’s their apology right? I think they are entitled to an apology before I am. When clearer heads prevail, I’m sure there will be some sort of acknowledgment of wrongdoing.”

Western University did not respond to request for comment.