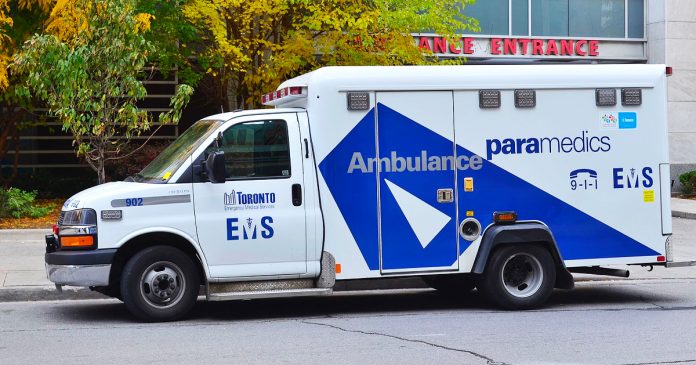 An unvaccinated Toronto paramedic who has been a first responder for 23 years warned in an interview with True North that vaccine mandates are having negative impacts on first responders in the city.

The mother of four, Scarlett Martyn, has been suspended by the city for not complying with its mandatory COVID-19 vaccination policy for healthcare workers and was recently terminated without cause, meaning that she will be denied severance pay.

“We’re brutally short staffed. The last weekend I worked, there were times, it was night shift over the weekend, when several locations had no ambulances to send. Zero ambulances in the city,” Martyn told True North.

“Response times are through the roof. It’s bad, it will have a huge impact on survivability and lives lost and having a positive outcome.”

According to Martyn, who has been awarded the Exemplary Service Medal for her work, the policy “was a mistake” and that short-staffing paramedics “is a bigger risk” to public health than COVID-19.

“We’re not putting anybody at risk being unvaccinated… If our PPE that we’ve been wearing for 20 months and through other pandemics with no vaccine – we’ve worked through SARS, the Avian Flu – I think our PPE works,” said Martyn.

The City of Toronto has implemented its own mandatory vaccine policy for all city employees including healthcare workers. The policy was first unveiled on August 26 and all staff were required to report their vaccination status as of September 17.

Martyn also recounted how students being sent for clinical experience by colleges are not being allowed to observe some patients in the back of an ambulance due to extensive COVID-19 screenings of patients. While some patients can be seen by students, Martyn noted that most 911 calls resulted in a failed screening.

“They haven’t learned how to manage a sick patient in a chaotic scene and upset family members. They’re being turned out and they’re very bright, they’re very capable but to have them robbed of that whole year of patient assessment and all of the things that go with that and they’re just being unleashed on the public,” Martyn told True North.

Upon finding out that she would be required to be vaccinated, Martyn approached her employer with a letter recommending alternatives like testing but was given a curt response and told to get vaccinated.

“As much as you try to comply with the policy and try to meet them halfway… My suspension letter had me as insubordinate, willfully disobeying workplace health and safety, failing to get fully vaccinated, undermining critical health and safety measures implemented by the city to maximize vaccination rate to protect us,” said Martyn.

“The whole process was humiliating. Here I was as a good employee, I wrote a letter, I did my due diligence. They gave a vaccine education course, I took it and said I still have questions and concerns. I’m not being noncompliant.”

Martyn was also told to hand over her city ID and any keys that can access narcotics compartments on ambulances.

“I’m being treated like a criminal because I don’t want to take this vaccine. I’m no longer trustworthy to have city ID or drug keys?” said Martyn.

According to Martyn, her personal decision to not be vaccinated stems from her own experience treating patients with adverse reactions.

“I’ve seen a rare type of stroke immediately after vaccination and the family said ‘he was fine before this.’ I’ve seen cases of heart inflammation. I don’t know further if they’ve been diagnosed as related to the vaccine but we know that it is an adverse reaction when we are picking them up after people are vaccinated,” said Martyn.