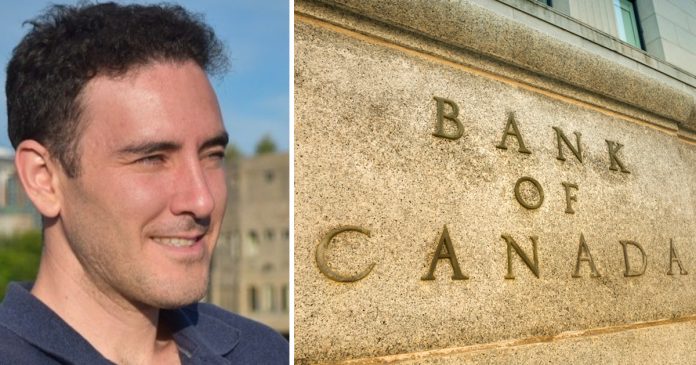 A Bank of Canada researcher who works from home is being threatened with termination after he declined a COVID-19 vaccine.

According to Blacklock’s Reporter, Joseph Hickey, who is also the executive director of the Ontario Civil Liberties Association, said the Bank’s position was unreasonable.

“I’m working from home. There is no reason why I should not be allowed to continue,” Hickey told the outlet.

“The Bank essentially tried to coerce employees into becoming vaccinated even if they worked from home. This is a clear case of coercion.”

Hickey, who was suspended without pay on November 22, 2021, worked as a PhD researcher in the analytics division.

A letter sent to him by the Bank claimed that his “employment may ultimately be terminated if you remain non-compliant.”

“I believe in the necessity of being true to your conscience. This is who I am. That absolutely should be sufficient, and that’s really the heart of the matter, isn’t it? If we’re at a point where the government can violate individual freedom of conscience in such a direct and brutal way then we are in a really dangerous place,” said Hickey.

“If you are not going to allow individuals to do that then you are making society very fragile. You are subjecting people to the dictates of a central authority, and that central authority is human and fallible and can be wrong. Where does it go next?”

On November 12, Hickey wrote to the Bank and requested an exemption as a remote worker and based on the fact that he’s an observant Catholic.

“My personal conviction is informed by the values imparted to me from my upbringing as a member of the Catholic Church and as a student in Catholic elementary and middle school in Ontario,” wrote Hickey in the letter.

“These include the values expressed in the philosophy of Saint Thomas Aquinas who believed that ‘conscience is the consideration of a specific case in light of one’s moral knowledge.’”

Shortly after, the Bank rejected the exemption without explanation.

“We are not unionized. We don’t have a union we can turn to with questions. This came out of the blue. It was a change to terms of my employment that I do not agree with. There was no offer of severance, no offer of Employment Insurance,” Hickey told Blacklock’s Reporter.

“They are strong-arming me to get vaccinated. My salary was removed, my benefits were removed and access to my computer. It was very quick, very harsh.”