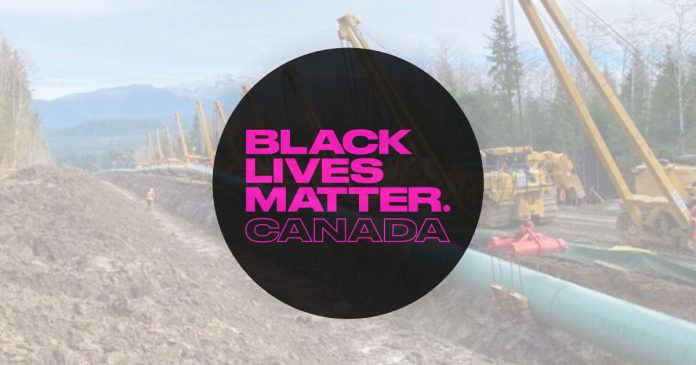 Black Lives Matter Canada came out in support of the illegal Coastal GasLink pipeline protesters, according to a Facebook post from Friday.

“We unequivocally stand in solidarity with Wet’suwet’en Land and Water Defenders,” said BLM Canada. “We know there is no Black Liberation without Indigenous Sovereignty.”

“We support Indigenous people in their pursuit of Land Back and advocate for the abolition of all state and militarized violence, including the police and RCMP! We kindly ask that you read through the demands and take action!”

According to BLM Vancouver, the construction of Coastal GasLink is in direct contravention of the United Nations Declaration of the Rights of Indigenous People. The group encourages people to support the protesters by hosting “solidarity rallies,”  pressuring governments, banks and investors, and “com(ing) to camp.”

They go on to state that Canada needs to “defund, dismantle and abolish policing institutions” to create a future that is free of state-sanctioned violence.

BLM Vancouver said the expansion of fossil fuel projects is in direct opposition to climate justice and that arresting protestors during climate change is “morally repugnant.”

The RCMP recently cleared a blockade erected by protestors at a Coastal GasLink site after more than 500 pipeline workers were stranded with no access to food and water.

The Mounties revealed on Nov. 18 that they would be enforcing a court-ordered injunction on the site.

“We were hoping that a solution would be reached without the need for police enforcement,” they said in a statement. “However, it has become very clear to us that our discretionary period has come to an end and the RCMP must now enforce the (court) orders.

BC Liberal MLA and leadership candidate Ellis Ross has repeatedly spoken in defense of Coastal GasLink, arguing that the democratically elected chiefs and councils of every band along the pipeline route have signed onto the project. He points out that the protesters only represent a small band of hereditary chiefs.

“They’re quietly dismantling our economy … under the guise of the United Nations Declarations of Indigenous Peoples,” said Ross.