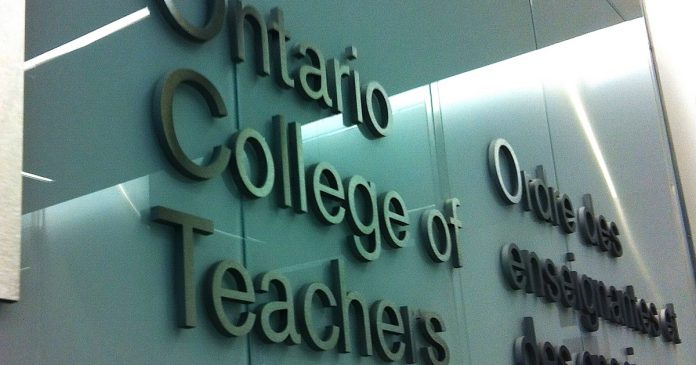 An advisory released last week by the governing body for Ontario teachers calls on its members to take “urgent action” on “anti-black racism” (ABR) by reflecting on how their position, power and privilege are used to “maintain systems of oppression and colonialism.”

The Ontario College of Teachers (OCT), which is the regulatory, licensing and disciplinary body for the province’s 126,465 teachers, maintains in the 11-page professional advisory that educators must demonstrate “empathy, respect and understanding” of the “lived experience” of students, “particularly those who identify as black.”

The document does not refer to the “lived experiences” of any other minority groups, whether Muslim, Asian, South Asian, LGBT or transgendered. According to OCT’s website, no professional advisories have been issued for any others either.

The document’s authors contend that they too are jumping on the ABR bandwagon because it is an “ideal time” to do so. The lead writer of the advisory, Amorell Saunders N’Daw, is a long-time equity and diversity consultant who works for an academic headhunting firm.

It should therefore come as no surprise that the document is full of woke-speak and the requisite anti-racism terms such as oppression, marginalization and decolonization. Not even the province’s governing body for teachers, it seems, understands how racist that is. But then, as I’ve found, a pool of like-minded and highly paid educrats appear to regularly gravitate from administrative positions to positions spreading the same woke-speak.

Taking a page from the very dangerous critical race theory now espoused by the Toronto District and Peel District School boards, the document claims “anti-black racism” is deeply embedded in Canadian institutions, policies and practices — so much so that it is “normalized or deemed invisible to the larger white society.”

One such example is the apparent “hyper-surveillance of black students” involving a proliferation of security cameras inside and outside of school, the appearance of hall monitors and regular police presence.

(It is interesting to note here that since the TDSB got rid of their school resource officers in 2017 — following protests and outrageous advocacy by Desmond Cole — crime has increased in its schools).

Another example, according to the advisory, is the excessive use of white, patriarchal teaching materials in all subject areas of the curriculum — materials that “reinforce white supremacy” by disregarding the experiences of other races, including blacks.

The advisory claims that school uniform policies and “restrictive dress codes” — which ban hats, do-rags or coats in classrooms — prevent black students from culturally expressing themselves.

Too bad they don’t realize that having a dress code is simply an attempt to foster respectability.

But the most outrageous example is the idea that because of racism, black students are subjected to more detentions, suspensions and expulsions.

The advisory makes it clear that educators should strive to be competent in “anti-racist practices” to address anti-black racism. But it also warns its members that professional misconduct under the Ontario College of Teachers Act (1996) now includes making remarks or engaging in behaviours that expose any person or class of persons to hatred. That could include off-duty and electronic conduct, or remarks made to anyone.

The advisory encourages teachers to create “safe spaces” for black students and urges their families to reach out to discuss their academics and well-being. It also tells them to actively listen to the concerns of black students, to commit to learn more about anti-black racism and to “unlearn” practices or conscious biases that cause harm to black students.

This policy document blames systemic oppression and racism for the normalization of “low educational performance” of black students and the number of male black youths who drop out of school.

“(They) consider staying in school more harmful to their sense of worth than leaving,” the advisory claims. “They do not find the schools to be welcoming.”

The more I write about these anti-black racism initiatives, the more I realize how divisive and racist they really are. No other minority community is receiving this kind of attention, which seems to imply that racism only affects the black community.

How will treating students with kid gloves, dumbing down the curriculum or not giving suspensions when discipline is warranted improve performance? I’m betting it will have the opposite effect.