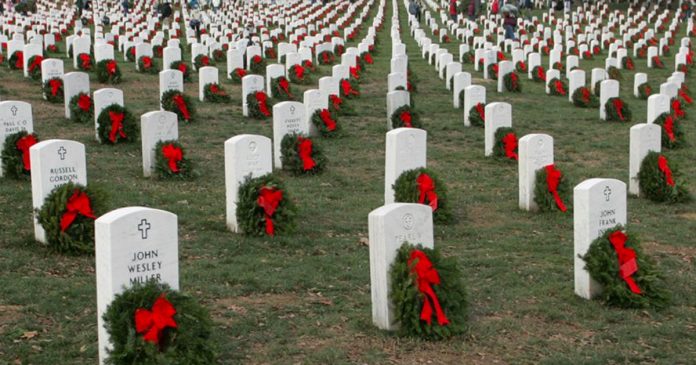 The veteran support group Wreaths Across Canada is looking for help after 3,000 wreaths meant to be placed on the graves of fallen soldiers at the National Military Cemetery in Ottawa were stolen by unknown culprits.

According to the Ottawa Citizen, the theft occurred between Saturday night and Sunday morning.  The wreaths were stolen from a Maxville property.

“I was just stunned,” President of Wreaths Across Canada Cyndi Mills told the outlet. “Who takes 3,000 wreaths? Who does that?”

Organization volunteers wove the wreaths themselves out of wild grapevines from local properties.

One 32-year-old volunteer, Robert — also known as “Bob” — said that he was personally hurt by the actions of the thieves. His father and grandfather both served in the military.

“Unfortunately for the last three months, we’ve been walking around telling every single person in town with pride what we’re doing,” said Bob.

According to the volunteer, the wreaths could go for up to $15,000 if the culprits sell them.

“Although there are good people, there are bad people,” said Bob. “And, unfortunately, this is a scenario where we’ve been taken advantage of in such a distinct fashion that the worst part is they must have known what we were doing and why we were doing it and still chose to do it.”

The incident has put a dent in the organization’s plan to have 6,000 wreaths out at the cemetery this weekend.

Wreaths for Canada has appealed to the thieves to return the wreaths, no questions asked.

“Give us back what we’ve worked so hard on. And you know… I personally will look the other way,” said Bob. “And that’s what I’ve heard from our team and Wreaths Across Canada … People make mistakes and poor decisions, and at this time it’s not about that person who took it. It’s about the graves that now won’t receive a wreath come Sunday.”

The organization has called for more volunteers to help them meet the deadline.