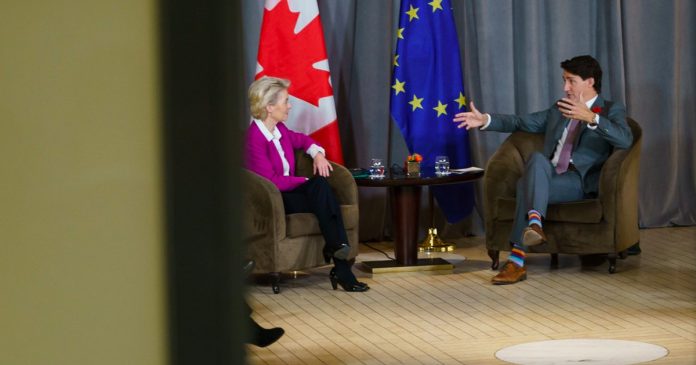 The European Parliament accuses the Liberal government of being asleep at the switch since 2018 when it comes to levelling harsh sanctions on some of the world’s worst human rights offenders.

In a November report, the European Parliamentary Research Service reviewed Canada’s performance when it comes to sanctioning authoritarian countries like Russia and China.

“Canada’s (Magnitsky) list got off to a strong start but is currently dormant, with targets from just five countries and no new names added since 2018. Critics accuse Justin Trudeau’s government of failing to stand up for human rights,” the briefing states.

In 2017, the federal government passed the Sergei Magnitsky Law, otherwise known as Justice for Victims of Corrupt Foreign Officials Act, to sanction corrupt officials who commit serious human rights violations in other countries.

The law was introduced by Conservative MP James Bezan in 2016 and was named after anti-corruption Russian tax official Sergei Magnitsky, who died in police custody in 2009 after being denied medical attention.

To date, numerous Conservative MPs including MPs Bezan and Garnett Genuis have repeatedly pushed for the federal government to impose strong Magnitsky sanctions against human rights abusers from China, Russia, Sri Lanka and beyond.

Genuis spoke to True North, saying, “the Magnitsky Act provides an effective tool for holding human rights abusers accountable, yet the Liberal government has been very sparing in its use. This is sadly consistent with the lack of action we have seen from the Trudeau government on human rights in general.”

“Prime Minister Justin Trudeau and his Cabinet failing to acknowledge the Uighur genocide by abstaining in the vote declaring genocide against Uighurs in China – in the face of the most recent acts of Russian aggression across Ukraine’s Eastern border, the Trudeau government is nowhere to be seen.”

The last time the Liberals levelled Magnitsky sanctions was following the murder of journalist Jamal Khashoggi at the hands of those acting for Saudi Arabia. 17 Saudi nationals were sanctioned under the regulation.

Instead of using Magnitsky Law Sanctions, researchers note, the Liberal government has relied on the Special Economic Measures Act (SEMA), specifically to put pressure on countries such as Belarus, China and Nicaragua. This has been the case since September.

The Magnitsky Law was designed to target the worst violators harshly.

“I certainly agree with this criticism,” Genius told True North. “Time and time again, Trudeau’s government has failed to adequately stand up for human rights, both in the House of Commons and on the international stage. Canada is a country built on the universal values of human rights, democracy, and freedom.”

“The Trudeau government’s lack of action on human rights reflects poorly on Canada at large on the international stage…We are compromising our values and losing influence at the same time.”

According to a statement given to True North by Global Affairs Canada International Development Spokesperson Geneviève Tremblay, the federal government has undertaken “11 rounds of important autonomous sanctions to address gross and systematic human rights violations” including against entities in Belarus, China and Russia through SEMA.

“Canada is gravely concerned by the serious human rights violations resulting in the repression of Uyghurs and other ethnic minorities in the Xinjiang Uyghur Autonomous Region (XUAR) by Chinese authorities. We have taken measures to respond,” Tremblay told True North.

“In March 2021, Canada imposed targeted sanctions under the SEMA against four Chinese officials and a Chinese entity in response to gross and systematic human rights violations that have been committed by China in the XUAR.”