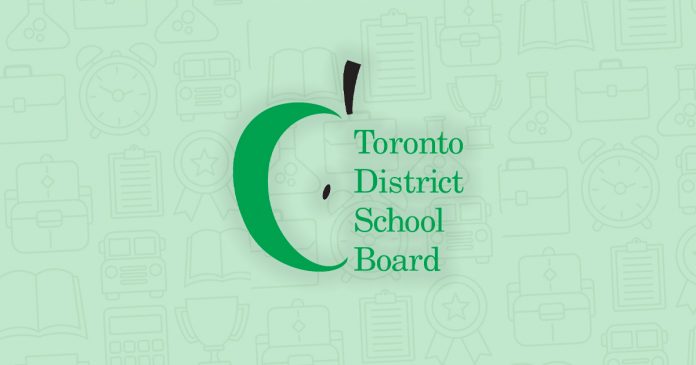 Toronto’s Jewish advocacy groups are speaking out against a report calling for Toronto District School Board (TDSB) trustee Alexandra Lulka to be reprimanded publicly.

The report and its recommendation came after Lulka spoke out on Twitter against a series of anti-Israel manuals produced by a TDSB equity employee.

The fifty-page report was released Friday and penned by integrity commissioner Suzanne Craig. Craig concedes that while some of the materials in the manuals can be considered anti-Semitic, Lulka erred in that she failed to note the books’ “positive educational value.”

An outside investigator – hired by Craig in July and characterized as “independent” – also claimed that Lulka’s Twitter statement perpetuated several harmful and recurring “stereotypes” about Palestinians and/or Muslims.

Lulka never mentioned either group in the May 23 statement.

Lulka was also called out for retweeting one of my exclusive stories on the manuals, which were sent to an opt-in list of teachers by self-described “gay Latine transformer” and equity employee Javier DaVila.

I myself combed through both manuals in May and did not find much positive in either of them. Besides recommending a documentary and a book about a terrorist, children’s books that characterize Israelis as thieves and murderers and giving advice on how to teach students about the hateful Boycott, Divestment and Sanctions (BDS) movement against Israel, the rest of the content is thoroughly biased against Israel.

DaVila attempted to offset the inflammatory nature of the manuals by including input from fringe group Independent Jewish Voices.

Ontario MPP Gila Martow, who has created a Working Group Against Jew Hatred, said it’s not enough that the TDSB has allowed anti-Semitism to fester in its schools. They have also engaged in a “brazen attempt” to “criminalize” Jewish community supporters such as Lulka for calling out racism.

Noah Shack of the Centre for Israel and Jewish Affairs (CIJA) says Lulka is subjected to a double standard for being expected to highlight positive elements in the very manuals that have anti-Semitic materials.

“All too often a double standard has been applied when it comes to anti-Semitism within the TDSB and the impact of Jew-hatred is erased or excused,” he said.

Michael Mostyn, CEO of B’nai Brith, called the TDSB report a “brazen attack on the rights of every Canadian Jew” as well as deeply “legally flawed” which raises an “apprehension of bias.”

Craig points out in her report that some of DaVila’s materials “could reasonably be seen as contributing to anti-Semitism” and that “even one article with anti-Semitic materials” is too many for Canada’s largest school board.

Bizarrely, Craig went on to conclude that Lulka is nevertheless worthy of censure because she should have been “clearer that the majority of the materials were educational and not problematic.”

The investigator behind the report was Morgan Sim of Parker Sim LLP, whom Craig cited. Sim was hired to look into whether Lulka’s tweet had shown discrimination against Muslims and Palestinians, and whether the author of the manuals had been subject to harassment.

Asked how Sim was selected,  TDSB spokesman Ryan Bird said it was based on her human rights “experience and expertise,” particularly with respect to municipal law.

A review of Sim’s personal Twitter page revealed some troubling positions, however. Besides supporting defunding the police and approving of anti-Israel tweets posted during the May conflict,  she also “liked” tweets promoting a violent rally on May 15 at Nathan Phillips Square which saw several Jews cornered and beaten by pro-Palestinian supporters.

Craig refused to provide the cost of Sim’s investigation, saying it would be contained in an annual report to the board sometime next year.

Bird confirmed that no other trustees have been censured or the subject of an integrity report during the current term.

The report will be considered at the TDSB’s regular board meeting Wednesday.