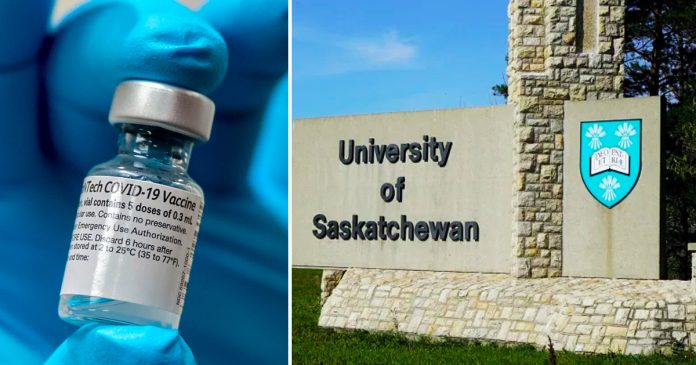 Students will need “at least two doses” of COVID vaccine to avoid being kicked off the University of Saskatchewan campus in January, and will require a third dose whenever they’re “eligible.”

The announcement comes as the school plans to deregister students who do not “show proof of receiving at least two doses” of COVID vaccine by Jan. 4. Rapid testing, which was allowed in the fall term, will no longer be accepted.

The university website provides its own “USask definition” of what it is to be fully vaccinated, including “three doses of a COVID-19 vaccine not approved by Health Canada.”

According to the “winter term vaccination requirements,” students already fully vaccinated don’t need to do anything “at this time.”

“However, when you are eligible for your third COVID-19 booster shot, proof of that will be required for you to continue to be considered fully vaccinated.”

The university encourages students to keep an eye on the government’s announcements for their eligibility.

The Saskatchewan government has made no mention that people being eligible for a third dose will require it to be considered fully vaccinated.

The government’s booster roll-out announcement is simply about “permitting eligible age and at-risk groups to receive their booster or third dose.” These groups were expanded on Tuesday to include 50 year-olds.

The university’s policy comes even as it reports “outstanding” vaccination rates, including 97% of students and 98% of faculty and staff.

The Justice Centre for Constitutional Freedoms (JCCF) has recently filed a lawsuit against the University of Saskatchewan for its upcoming vaccine restrictions.

Saskatchewan Polytechnic reversed its “vaccine-only” policy after similar pressure but has announced that the cost of rapid tasting must now be borne by the recipient. The JCCF puts these costs at $200 per week or more.

JCCF lawyer Andre Memauri called the schools’ policies not only a violation of basic rights but also irrational.

“Education is an essential service and at this point, with the emerging data and scientific literature, Universities have no valid justification for discriminating against students based on their private medical choices,” said Memauri.

Ethan Fisher opposes the University of Saskatchewan’s policy. He is a first-year law student at the school, as well as a regional coordinator with Students for Liberty.

“We were going to take our tests,” he told True North. “We did it often. It was clear that we were not bringing COVID onto campus. People who are vaccinated can still transmit the disease, and this is well borne out by the data. If someone had been confirmed to not have the disease within a day or two, it’s probably a lot more reliable an indicator than if someone had the vaccination six months ago.”

The vaccine-only mandate will come on top of pre-existing practices, including indoor masks, distancing and enhanced cleaning. This will be the case as the pandemic “is projected to continue … for the next several months.”