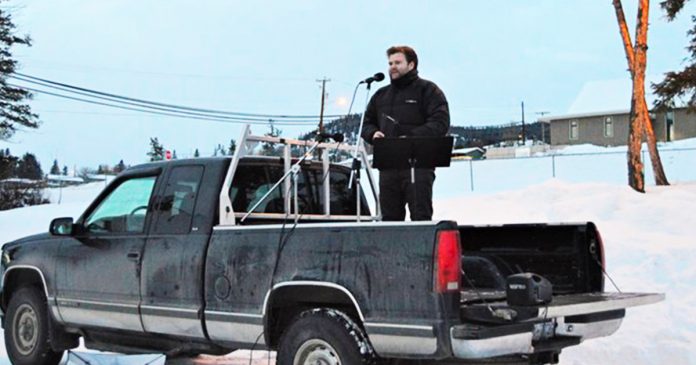 The day after Northern Health announced that churches in northern B.C. would require proof of full vaccination to hold in-person services again, a Prince George pastor has said that he will not be complying.

Andrew Simpson of the Heritage Free Presbyterian Church told True North he wasn’t surprised by the announcement and that his church will remain open to everyone.

“As a pastor, I will never ask somebody to present proof of vaccination or to reveal any medical details to attend a church service that I am presiding over,” Simpson said. “I wasn’t shocked at it but still very dismayed that the government would think they have the authority to implement something like that.”

Northern Health announced Thursday that faith-based organizations would be allowed to reopen, “as long as they are limited to 50% capacity in the place of worship and all participants over the age of 11 are vaccinated. Virtual or drive-in services can be held without a check of vaccination status.”

The largest of B.C.’s five health regions had banned in-person church services on Oct. 15 as part of the province’s “circuit breaker” measures to prevent the spread of COVID-19. These restrictions were specific to the northern region and intended to address a “surge” in COVID-19 cases that saw local hospitals “overwhelmed.”

Only places of worship in the Northern Health region have been told to require vaccination. Other health regions offer the option of half-capacity instead. All require masks.

Churches in B.C. had only reopened for full services in May. Before this, they had been locked down for 14 months, followed by limits of no more than 50 people. These restrictions affected weddings, funerals, baptisms and other faith services.

The Heritage Free Presbyterian Church was one of seven northern region churches given warning letters earlier this month for conducting services in defiance of public health orders.

Simpson told True North that the church had decided in October that enough was enough.

“We made the decision that we would not be closing our church, and we didn’t close our church, and that’s why we received a warning letter from the environmental health officer. But we’re determined we’re going to keep our church open, and we’re not going to be checking for vaccine passports.”

Simpson said the restrictions have been very difficult for the church but that the vaccine mandate is proving “absolutely devastating” for working people.

“In the past two months since vaccine mandates were introduced, I have counselled over 40 people who are all losing their jobs and many of them are losing their livelihoods over this,” he said.

“I know one lady who came to me who has the responsibility – she’s a single lady – of looking after her elderly parents. She’s losing her job that she’s had for over 20 years. And another man who’s married and has four young children, and he’s been in that job for nearly ten years, and he’s been forced out. So the harm and destruction that’s coming very soon when these mandates take effect is going to be absolutely devastating.”

“If people ever need a place to go where they can in a sense forget about COVID and just be welcomed in, it’s church,” Simpson concluded. “And now the government is taking that from them as well.”