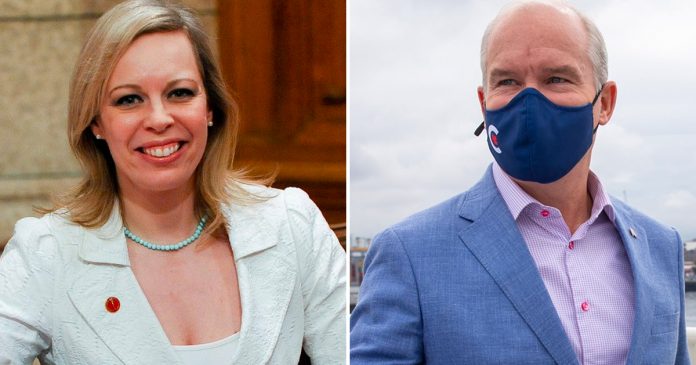 Conservative Party of Canada (CPC) Senator Denise Batters fired back at her party’s leadership on Sunday, saying the CPC national council must listen to its members and force Erin O’Toole to face an early leadership review.

Batters made the statement after receiving an email from CPC president Robert Batherson the same day. The letter stated that the national council had found Batters’s petition for an early leadership review to be “invalid.”

Batters launched the petition in November, calling for O’Toole to face a leadership review in six months rather than at the 2023 Conservative convention.

According to Batters, Batherson’s email provided no justification for the ruling other than a brief reference to his original statement.

“Once again, Mr. Batherson’s response to the serious concerns of our party’s members is dismissive and perfunctory,” she said.

Batherson had said in his original statement that it was wrong of Batters to launch the petition.

Batherson claimed that under Article 10.8 of the constitution, a leadership selection process could be launched when the leader dies or retires, resigns or more than 50% of votes cast at a national convention are for replacing the leader.

Batherson said in a statement emailed to True North on Sunday that the national council had decided to reject Batters’s petition after a review by the legal affairs committee and with guidance provided by the party’s lawyers.

Batherson said O’Toole neither voted on the matter nor was present for discussions.

Former CPC national councilor Marilyn Elliott had sent the council a letter on Dec. 3 that argued Batters’s petition was valid.

Batherson said in response to Elliott’s letter that the national council considers any concerns brought forward, but that they have to follow the constitution. He added the Conservatives are not holding a leadership review for O’Toole in the next six months as the petition demanded because the constitution states that national conventions where members can vote on a leader are held every two years.

“Less than one month after my petition at membersvote.ca was launched, already more than 7,100 supporters have signed it,” she said. “We will continue these efforts to ensure our members have their say not only on Mr. O’Toole’s leadership, but also on the future direction of our party.”

The Conservative constitution states a referendum on any matter can be held if 5% of party members in five provinces sign a petition requesting the party to poll the membership on the topic.

Batters blamed O’Toole for the Conservatives losing the last election, claiming he “flip-flopped on policies core to (the) party within the same week, the same day, and even within the same sentence.”

O’Toole kicked Batters out of the national caucus the following day.