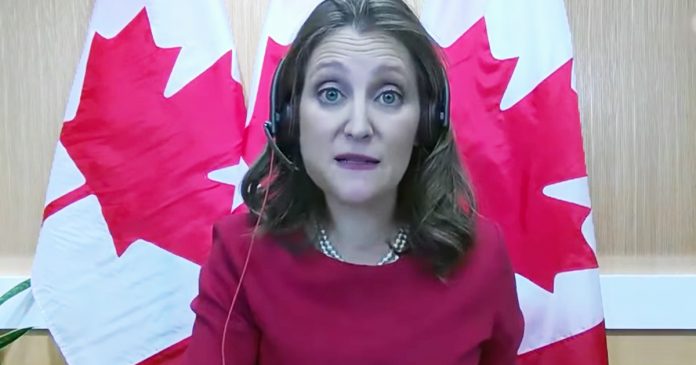 CTF federal director Franco Terrazzano said that while tax revenues shrank the deficit minimally, spending remained up across the board at a time when inflation continues to spike.

The CTF warned the debt is expected to reach $1.2 trillion by the end of this fiscal year.

“Years of borrowing means taxpayers will lose out on nearly $200 billion by 2027 just to pay for interest charges on Canada’s debt,” said Terrazzano in a news release. “That’s money we can’t use to hire more nurses or lower taxes because it’s going to bond fund managers to service the government’s debt.”

Terrazzano went on to describe government spending as seriously out of control.

“The cost of living is soaring and Canadians should be worried about how the government is going to pay for its unprecedented spending and hundreds of billions of dollars in new debt. The feds need to stop dishing out cash we don’t have and pouring fuel on the inflation fire. Freeland needs to hit the brakes on this government’s runaway spending train.”

Terrazano’s comments were echoed by Conservative MP and finance critic Pierre Poilievre, who called the Liberals “Canada’s most expensive government ever.”

Poilievre has chided Prime Minister Justin Trudeau in recent days by referring to his spending habits as “JustinFlation.”

“A half-trillion dollars of inflationary deficits mean more money chasing fewer goods driving higher prices. Housing and gas are up a third, so youth can’t afford to get to work or buy a home. And families can’t afford the extra $1000 it will cost to feed themselves next year,” said Poilievre.

“Instead of reversing this high-cost, high-inflation agenda, today the government announced yet another $71 billion of inflationary spending, costing nearly $5000 for every family in Canada. Worse, they plan to raise taxes on energy, wages and alcohol on January 1st.”

Among the spending commitments included in the fiscal update were $8.1 billion in pandemic spending as well as $85 million for 2022-2023 to process more resident and temporary resident immigrant applications.

“The slower recovery scenario would be expected to add about $6 billion to the deficit across the horizon, and increase the federal debt-to-GDP ratio 1.8 percentage points by 2026-27,” the fiscal update read.  “In the faster recovery scenario, the deficit would be reduced by approximately $6 billion, on average across the projection, and the federal debt-to-GDP ratio would decrease 1.9 percentage points by 2026-27.”