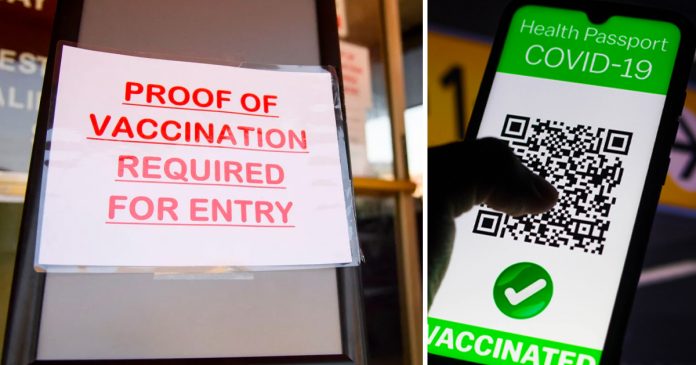 According to an October survey by the Canadian Federation of Independent Business (CFIB), 68% of hospitality industry businesses and 62% of arts and recreation businesses nationwide are experiencing lower sales since vaccine passports came into effect.

Only 4% of hospitality businesses and 9% of arts and recreation businesses have reported higher sales.

In every province and territory except for Nunavut and the Northwest Territories, Canadians must produce proof of COVID-19 vaccination to dine in at a restaurant, attend a concert or show or participate in a group sport or organized activity. Age restrictions and degree of strictness vary across jurisdictions.

“Regardless of one’s views on vaccine passports, there is no doubt they’ve led to a further drop in sales for the small businesses required to use them,” CFIB President Dan Kelly wrote on Twitter.

Despite the evidence of continuous strain on businesses, CFIB does not advocate for an end to vaccine passport schemes. Rather, the organization is asking for more government funds to subsidize businesses required to implement the programs.

“With regards to vaccine passports, we just want to make sure governments are aware that they are placing an additional burden and costs on the very sectors that were the most impacted by the pandemic when they impose vaccine passports,” CFIB Public Affairs Manager Milena Stanoeva told True North.

“We have urged the federal government to work with the provinces to provide financial compensation to businesses that have to enforce vaccine passports through the $1 billion fund it set aside for them for the implementation of these programs.”

In addition to lower sales, half of Canadian businesses affected by vaccine passport schemes also report increased costs due to new staffing and technology needed to check patron QR codes.

In an earlier Aug. 2021 CFIB member survey, 37% of small businesses said they were in favour of checking their customers’ vaccine passports, while 16% were undecided. With large events such as concerts, festivals and sports contests, the number of businesses supporting vaccine passports rose to 65%.