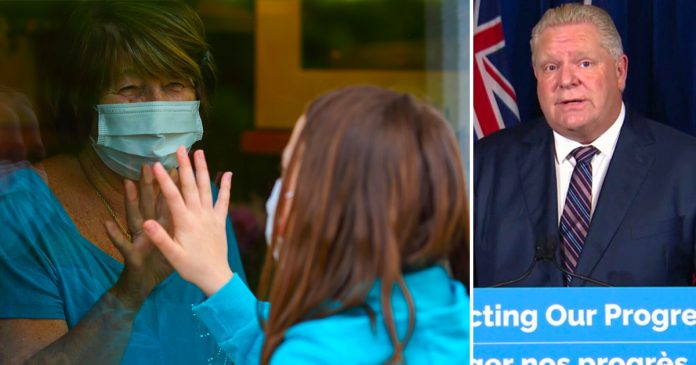 With cases of the Omicron variant rising every day in Ontario, the Ministry of Long-Term Care (LTC) finally woke up to the fact this week that our seniors – particularly those living in congregate settings – are the most vulnerable.

On Tuesday, LTC minister Rod Phillips unveiled a series of measures to “protect the health and safety” of residents in long-term care and retirement homes. He mandated enhanced testing for all those entering these facilities, including a COVID test for visitors and essential caregivers. These rapid antigen tests would be required regardless of one’s vaccination status.

The new measures – which take effect Friday Dec. 17 – also require that caregivers be fully vaccinated by Feb. 21 of next year. The timeline is far too lengthy according to professor and LTC advocate Vivian Stamatopoulos, who spent much of the past 19 months trying to improve the lives of seniors stuck in LTC homes.

It is shameful that it took 19 months – and the deaths of nearly 4,000 seniors in congregate care – for Ontario’s long-term care ministry to make seniors a priority. Not even a scathing 332-page report from the government-appointed LTC Commission could move the government –  or then-LTC minister Merrilee Fullerton – to admit that they really, really dropped the ball on the file.

At the time Fullerton coldly brushed off the findings, claiming circumstances had improved in LTC homes (which was not true), and they all needed to move forward. Never mind the negligence, the debilitating isolation of residents from repeated lockdowns and the abuse of power by many LTC home providers under the ministry’s watch.

I will never forget writing about the rampant spread of COVID through these homes whose administrators weren’t prepared, where caregivers came to work with COVID (or were forced to come to work) and people were left to die – often from dehydration – in horrific and heartbreaking circumstances. Several of these circumstances were documented in a May 2020 Canadian Military report.

It quickly became clear that inspections of LTC homes were virtually non-existent. There were almost no monitoring and compliance audits of the few that were inspected. Certainly no licences were yanked for non-compliance.

Yet the inspections that were done cited issues of neglect and abuse repeatedly.

When Fullerton appeared before the LTC Commission this past March, she admitted she knew in February of 2020 that personal support workers (PSWs)  who worked in more than one LTC home might spread the virus but says her ministry didn’t act right away over fears this would cause a staffing collapse.

It took until April 26 of 2020 – long after the damage was done – to mandate that PSWs only be permitted into one home.

Fullerton also told the Commission she wasn’t aware the LTC ministry had a pandemic plan.

As someone with a mom in a retirement home who endured incredible isolation last year, I have particular insight into the problem.

But more than that, I have often wondered whether rapid testing would have saved my sweet 91-year-old dad, who died of COVID last Nov. 29. The pernicious disease raged through his Alzheimer’s facility, brought in by an asymptomatic caregiver who worked an entire weekend with it. All but one of the 47 residents caught it, and 15 died, including my dad.

Had there been rapid testing at the door, perhaps I’d be telling a different story.

But my dad has been gone a year now – one of nearly 4,000 who lost their lives because a government ministry dragged its heels and didn’t make seniors a priority.

Their announcement this week is too little, too late.