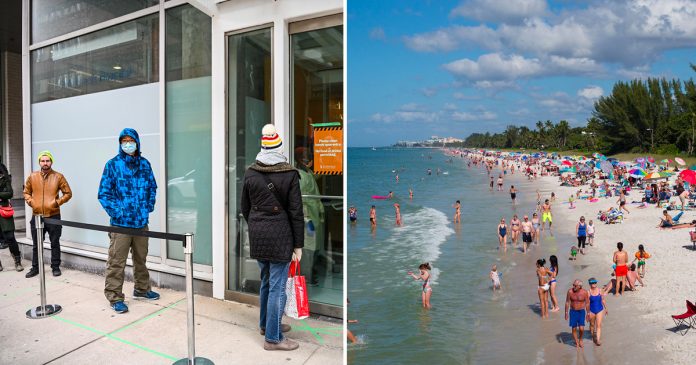 They’re uncanny, the differences between Florida and Ontario.

While seniors and other people down here are enjoying normal freedoms, my mother is locked away in an Ontario retirement home.

I noticed the difference – the logical easing of draconian restrictions – as soon as I crossed the border into the United States a month ago and started driving south. In most places where I stopped – from West Virginia to Charlotte, North Carolina to Savannah, Georgia – masks were not a must unless we took an Uber.

After nearly two years of being entertained primarily by online apps and virtual concerts, it has been so refreshing — so free — to take in a Broadway show, a live indoor concert and a movie where we could sit and munch on popcorn while sipping diet Coke.

As ridiculous as the measures were before I left Toronto, they have become outrageously draconian and cruel with the onset of the Omicron variant – a highly contagious strain of COVID that presents as mild in the vast majority of cases, particularly those who are fully vaccinated.

Some long-term care and retirement homes have gone into complete lockdown (à la 2020) over one case of Omicron. One such home is where my 88-year-old mom resides.

The residents are not allowed to leave their rooms, the home or – to my great surprise – the country. My mom was supposed to come down to Florida next week for some relief from the winter and the over-the-top, bordering-on-communist-China-type rules in Canada. Last year was horrible for her, as it was for many other seniors. I was planning to fly up next week to fetch her.

Her bags were already packed.

I’ve been threatened with fines if I dare try to take her out of the home and down south.

Seniors like her have already lost two years of their life to COVID restrictions. Heaven forbid Toronto Public Health officials should have some compassion and try to compromise.

Most have lost all credibility.  They have repeatedly moved the goal-posts from assuring us we’d be free to resume our lives after two vaccines, to peddling the third booster, to telling COVID-lockdown-weary Torontonians and Ontarians it would be best to enjoy Christmas virtually or to meet with a very small number of people.

I have to laugh at the stories of rapid test kits being snatched up at LCBO stores and shake my head at the fact that many Torontonians will have to wait two months to get their boosters.

While an ordinary lab can get testing results turned around in 30 minutes for rapid antigen tests and within 36 hours for the PCR test, TPH – complaining that they don’t have enough highly paid bureaucrats to handle the backlog – is taking 72 hours or more.

When we arrived in Florida, we got our Moderna booster within days at a neighbourhood pharmacy. The whole process was quick and efficient.

It is a relief to walk into grocery, clothing and drug stores where someone isn’t standing at the door warning us to wear our masks, or having a fellow shopper chastise me for not standing exactly six feet away from him or her.

They’re only a couple days’ drive apart, but in terms of freedom Ontario and Florida seem like different worlds.

But that’s largely because our Canadian politicians are weak-willed and have passed the buck to unelected and power-hungry medical officers of health.

They’re too tone-deaf to recognize that people are tuning them out.