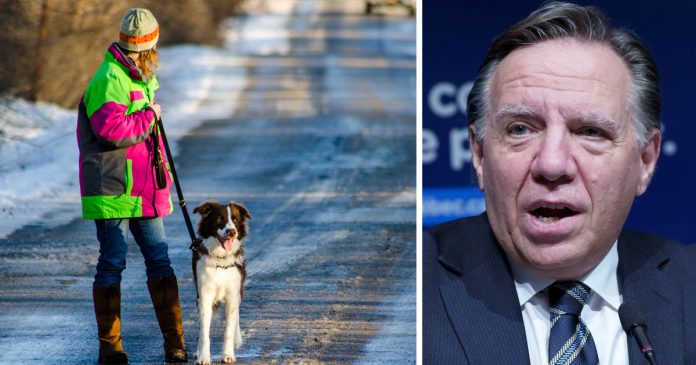 Following public outrage, Quebec will permit people to walk their dogs between 10 p.m. and 5 a.m., the hours covered by the province’s latest curfew, according to the Canadian Press.

“As currently drafted in the ministerial decree, the fact of leaving your residence to walk your dog is not one of the exceptions to go out outside of curfew hours,” said the Quebec Ministry of Health and Social Services in an email to the Canadian Press on Sunday. “However, it is the government’s intention to include this missing exception again as soon as possible.”

Quebec’s current curfew came into effect Friday. Quebecers were notified via an emergency alert sent to their cellphones and televisions. The government reimposed the curfew because of high COVID-19 case counts brought on by the Omicron variant.

Quebec’s previous curfew, which ended in May, permitted people to go outside after hours to walk their dogs if they stayed within one kilometre of their residences.

According to the new curfew, people are permitted to stay out only if they are doing activities such as travelling to work, going to a pharmacy or heading to a medical appointment.

Police officers have been granted the power to stop people outside of their homes during curfew hours. Fines range from $1,000 to $6,000 for those unable to justify why they are outside their homes. Youths 14 years old and up can receive a $500 fine.

“A curfew is particularly problematic because it purports to empower police officers to stop and question individuals simply for being outdoors at certain times of day,” said Zwibel. “The burden of these police stops is likely to fall disproportionately on racialized individuals and other marginalized groups.”

Zwibel said the CCLA is concerned about Quebec’s restrictions on private gatherings, which amount to “state intrusion into people’s homes.” The civil liberties law firm is urging Quebec to reconsider these measures and be transparent about when they will be lifted.

Quebec is the only province in Canada to implement a curfew to stop the spread of COVID-19. The previous curfew introduced in 2021 lasted for more than five months.