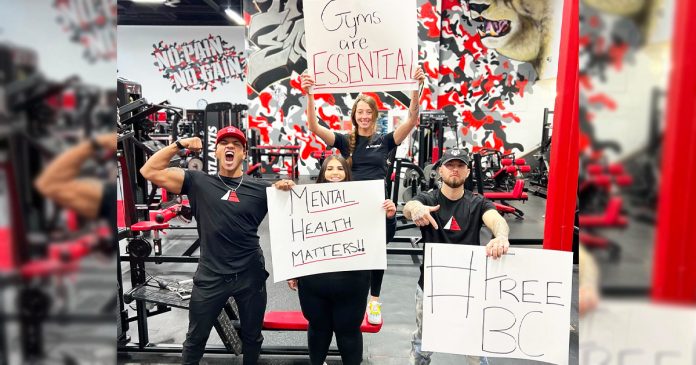 Iron Energy Fitness Centre Gym in West Kelowna, one of several B.C. gyms publicly defying the province’s lockdown measures, has asked its members to bring their cellphones to record any efforts to shut them down.

“Bring your phones and get ready to record anything that happens,” the gym’s Facebook post read Monday. “If anyone shows up at our gym and tries to shut us down, we want it blasted all over the internet.”

Accompanying the post was a video by co-owner Brian Mark “looking for lawyers who are ready to put up a fight.”

Public health authorities ordered fitness facilities in B.C. to close on Dec. 22 with an intention to revisit the order on Jan. 18. As with gyms in Quebec and now Ontario, the closures were allegedly due to new anti-COVID measures targeting the Omicron variant.

Mark and five other owners of Iron Energy Fitness had defied the order since last week. On Dec. 31, they announced on social media that they would no longer be complying with any lockdowns.

“As owners we followed all the safety procedures laid out by the powers that be, even when they didn’t make sense, but to get our gym taken away?” read their announcement. “The one place we had to unwind during times when fear is being shoved in our face?”

The same day, the gym received a warning letter from Interior Health alleging that health authorities had “received several complaints” that the gym was continuing to operate. The letter was cc’d to the West Kelowna RCMP detachment, from whom the gym received another warning.

In a series of social media posts and videos, Mark explained that the gym’s opposition to the lockdown is based on a combination of commitment to its 1300 members with a recognition of the contradictions and hypocrisies of the public health orders.

“You can sit down and drink alcohol and eat bad food, but you cannot exercise and work on your mental health,” one of the gym’s posts announced.

In another video, Mark asked members why it was important for gyms to stay open. Members’ answers revolved around mental health and the therapeutic effects of exercise, especially amidst the repeated lockdowns, fear and uncertainty of the pandemic and government response.

“It’s the only thing we’ve got going on,” answered one man. “It’s our therapy. Everything’s so negative these days; that’s my positivity right here. It keeps me alive. Please don’t shut the gyms down. We need them.”

At least two online petitions have been launched on behalf of B.C. gyms and their members – one demanding the government show its data or allow gyms to reopen, and the other asking that gyms be allowed to operate with capacity limits like the theatres and restaurants that were allowed to keep operating. The two petitions have amassed more than 85,000 signatures.

Health minister Adrian Dix said in a press conference on Friday that gyms who ignored the order to close would be punished.

“Public health orders will be enforced and I suggest that people follow them,” he said.

Several B.C. gyms that originally tried to stay open have since closed due to fines and legal pressure.

The Canadian Federation of Independent Business (CFIB) has repeatedly warned that any new lockdowns will prove devastating to small businesses. President Dan Kelly tweeted Sunday that “the average small firm has taken on $170K in COVID related debt. We cannot keep doing this.”

True North reached out to Iron Energy Fitness Centre but did not receive a response before publication time.