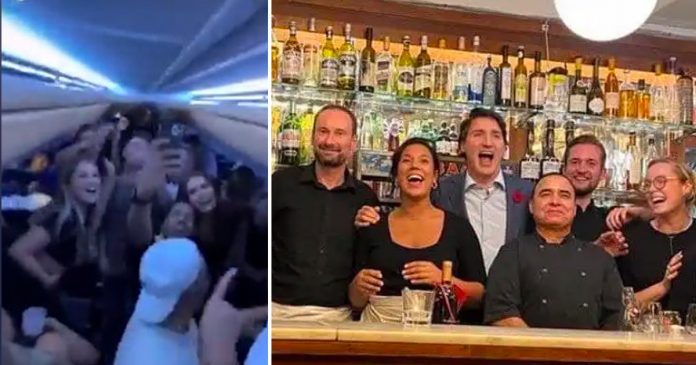 Videos of the Dec. 30 flight from Montreal to Cancun showed revellers singing and dancing in the aisle. At least one was vaping while others had what appeared to be alcohol. Some had pulled their masks down, but most were not wearing them.

“It’s a slap in the face to see people putting themselves, putting their fellow citizens, putting airline workers at risk by being completely irresponsible,” Trudeau said to reporters on Wednesday.

He added that he felt “extremely frustrated…like all Canadians who’ve seen those videos.”

“We know how hard people have worked to keep themselves safe, to limit their family gatherings at Christmastime, to wear masks, to get vaccinated, to do all the right things,” Trudeau continued. “I can assure you this is a situation Transport Canada takes extremely seriously, and we are definitely following up on that.”

Officials said Tuesday that passengers could be fined up to $5,000 per offence if Transport Canada finds them to have broken the rules.

As a result of the attention, the group of travellers – who would have had to have shown proof of full vaccination to board the plane – is now finding it difficult to get back home.

Despite the event organizer’s claim that the travellers followed all of Sunwing’s rules and bought their alcohol onboard, the carrier has now cancelled their return flight in the wake of negative publicity.

Air TRANSAT posted on Twitter that they would also be denying them passage.

“We confirm that they will be denied boarding based on our legal and regulatory obligations to ensure the safety of both our passengers and crew, which is our top priority,” the airline wrote.

Trudeau’s comments come weeks after he was photographed in the Netherlands maskless while hugging, drinking and laughing with fellow world leaders on his way to the COP 26 climate meeting in Glasgow.

He was also criticized for hosting a crowded Brampton fundraiser in September which saw 400 supporters packed into a banquet hall with no social distancing.

Only weeks earlier, he had attended another event in Mississauga that ignored capacity limits.

In June, Trudeau was seen laughing and drinking shoulder-to-shoulder with world leaders at a G7 summit in the UK, again maskless.

At the time, he had had only a single dose of COVID vaccine.