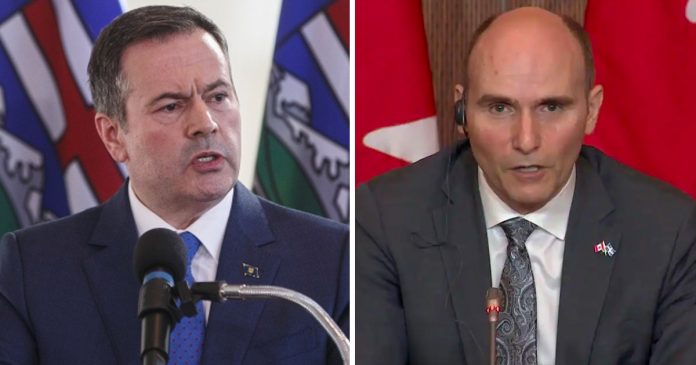 Premier Jason Kenney has vowed not to force mandatory vaccinations on Albertans after federal Liberal health minister Jean-Yves Duclos said he wanted to discuss such a mandate with the provinces.

Duclos announced the idea Friday, saying mandatory vaccination “is a conversation which I believe provinces and territories, in support with the federal government, will want to have over the next weeks and months.”

In a tweet responding to Duclos’s plans, Kenney stated that the province had already removed the power to force vaccines into Canadians from its Public Health Act.

“Alberta’s Legislature removed the power of mandatory vaccination from the Public Health Act last year and will not revisit that decision, period. While we strongly encourage those who are eligible to get vaccinated, it is ultimately a personal choice that individuals must make,” tweeted Kenney.

According to Duclos, the decision to “open the conversation” on mandatory vaccination was made due to alleged burdens on Canada’s health care system.

“What we see now is that our health care system in Canada is fragile, our people are tired, and the only way that we know to get through COVID-19, this variant and any future variant, is through vaccination,” said Duclos.

According to Duclos it would be up to the provinces to decide how or whether they would be implementing a mandatory vaccine policy for their citizens.

Duclos did not specify what he meant by “federal support” for the matter. Canadian military were recently posted to Quebec to help “speed up vaccination” in that province.

Several countries in Europe have already trod the path of forcing every citizen to get a COVID-19 shot.

Austria has pledged to make vaccination mandatory by February, meaning unvaccinated Austrians could face up to $4,071 in fines every three months.

As it stands, approximately 30% of Austria’s population is not fully vaccinated against COVID-19.
European Commission Chief Ursula von der Leyen has also stated that she wants to open up the conversation on forced vaccination with all EU nations.